Our Bastard: Anti-Heroes in a Heroic Campaign

Old school fantasy role-playing games made only the most bare bones of moral assumptions regarding what kinds of characters the players will choose. Yes, often players choose to play characters with noble intentions or with lofty causes, but sometimes that can get a bit boring for some gamers. Perhaps you're a neutral tomb raider who's just out for fortune and glory? How can you make it work?


These characters options are just as valid as the more traditional heroes when it comes to fantasy gaming, but they can be difficult to incorporate these characters into a party of characters who are comprised mostly of "do gooders." To make it work requires effort on the part of all the players involved and the referee and it's something I'd like to address.

So you sit down with your fellow players and referee. Everyone else has made heroic characters off to accomplish great deeds of good worthy of song and legend. Meanwhile, you've made a character who's a little more self-interested. Maybe they want gold, or magical items, or simply to be famous. You know that at some point, you're going to put heads when it comes to a moral quandary. So does this mean you can't play a sketchy thief with a silver tongue and questionable morals just because there's a paladin and holy-rolling cleric in the party? Absolutely not.

There are plenty of famous heroes of sword and sorcery who are most certainly not good. Robert E. Howard's famous barbarian Conan is self-described as "I live. I burn with life. I love. I slay and I am content." He doesn't concern himself with the morality of his choices. Conan does what he does because it is what he desires to do. Whether its motivation via revenge (as seen in the film Conan the Barbarian), or simply that he often finds the supernatural to be offensive and in need of a good killing by his hand - those are his choices and that is all that matters to him. When I was a boy, I read a Conan serial where he stole a drunken warrior's sword. The warrior was passed out next to his blade in a stupor. Conan took the sword because he needed a weapon and he believed that any man who would not respect his weapon does not deserve to have it. Is it opportunistic? Sure. But is it malicious? No. It is what it is. 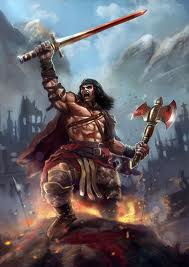 
In some cases neutral player characters are often motivated by a kind of benign self-interest. They're not out to screw over anyone to accomplish their goals - but sometimes you've got to break few eggs to an omelet. The thing is, a neutral character isn't likely to just throw loyalties and friendship to the wind for the sake of what seems like a good deal. They'll take advantage of people, sometimes even their friends, but they're not total bastards - at least not most of the time.

To me, a great example of this type of neutral character is Star Wars smuggler Han Solo. He said from the beginning that he was in it to get paid. "I ain't in it for your revolution, Princess - and I'm not in it for you. I'm in it for the money." Even Indiana Jones (as seen in Raiders of the Lost Ark), says he's motivated by "fortune and glory."


So the question is, if a character can't be motivated by moral obligation to remain loyal to the party and participate in the adventure at hand, what's a referee to do? Well, first thing's first: Everyone in the game needs to sit down and discuss exactly what they're hoping to get out of the campaign. If a self-serving character who is only motivated by money is something that won't fit the campaign in any way, shape or form - well, perhaps the player should consider another type of character.

At the same time, other players shouldn't be so quick to write off that character idea. The trick is group trust and one of the biggest problems in gaming is when player characters do not trust each other. Under the blanket defense of "it's what my character would do" many characters have had their feelings. I'm calling shenanigans on that. That's self-serving excuse that's insulting to other players and the referee. Your personal validation and enjoyment of the game aren't the only thing that matter when it comes to gaming. There is no "I" in "D&D Party".

At the same time, your personal enjoyment of the game is important. So how do you balance being true to your character and not damaging other peoples' enjoyment of the game? You can be a bastard, but learn to be the party's bastard. Be the one willing to get his hands dirty where everyone else won't. Be willing to lie, backstab and double deal on behalf of the party (and sometimes without them even being aware you're doing it!). As a dear friend of mine put it, "Yeah, they're a bastard. but they're the party's bastard." Perhaps your anti-hero knows that hanging out with a bunch of do-gooders will keep his more selfish desires unnoticed, or that these tombs they're always plundering are easy money - all he has to do is tag along and occasionally get them out of a jam. After all, it sure beats working for a living!

This allows the group to maintain a sense of unified trust, and still allow for the non-heroic character to remain true to himself. If you're out for fortune and glory, ask for a larger cut of the treasure. If someone offers you a lot of money to betray the party, go to your fellow PCs and tell them you want a counter-offer. The important thing here is that the key of trust between players is maintained, because role-playing games are a social activity between friends.