Today is December 26th, known in many nations as Boxing Day. Today, I'm starting a new tradition in the OSR gaming community. With that I wish you a happy... 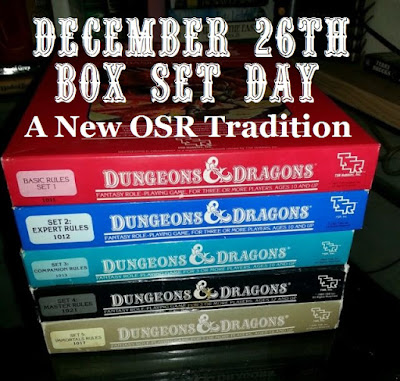 That's right, Box Set Day. How does one celebrate Box Set Day? Well for me, that means giving away an RPG Box Set. This won't necessarily be an OSR game, but it will always be an RPG Box Set. So, this year I'm giving away a complete Pathfinder Beginner Box. While I'm not a fan of Pathfinder's endless supplement glut, the core game is a great RPG and the Beginner Box has more than enough to keep a campaign going for quite some time. Rule book, adventure, color cardstock minis, maps, four pre-gen characters with rules for taking them to 5th level, and a set of dice. It's very open-and-play. 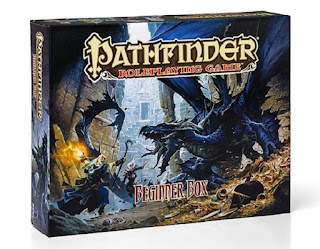 This Pathfinder Beginner Box is VERY SLIGHTLY used. I took the shrink off, looking through the contents, and then shelved it. It can be yours, but you have to comment today, December 26th, and tell me your favorite RPG box set. I'll select a winner on the 27th. The contest is open to all US residents, and it will be shipped media mail.

I encourage you to participate either this year, or next year. Let's cap off 12 Days of OSR Christmas with a little extra punch. As for next year, who knows? Maybe a Star Wars Introductory Adventure Box Set? A D&D Adveture Game Box Set (circa '91 or '94)? Shadowrun Alphaware Box Set? Who knows? Heck, you could even put together your own "box set." Next year I might throw together a copy of +Charlie Mason's White Box: Fantastic Medieval Adventure Game, along with Referee Screen inserts (and a universal screen), a few printed character sheets, and a set of dice - all in a plain white box. It's all about sharing the games and sharing the love. 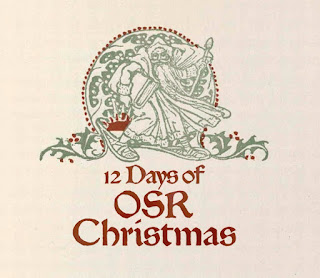 Today is the first day of The 12 Days of OSR Christmas. Simply leave a comment below (on this post only!) and I'll select one commenter each day to win a single random prize. Only one commenter per person, please.

But, there's a catch: You have to tell me why squirrels are awesome. If your comment doesn't include that, you're disqualified. 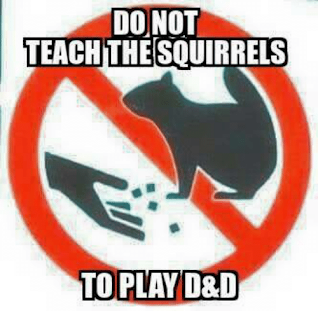 All prizes will be shipped via media mail and I ask that those who enter be residents of the U.S. 48, simply because I can't afford the insane international shipping rates.

Email ThisBlogThis!Share to TwitterShare to FacebookShare to Pinterest
Labels: 12 Days of OSR Christmas

So, with the release of +Charlie Mason's White Box and the upcoming release of the inaugural issue of his associated 'zine The Wizard's Scroll, I got to thinking about Swords & Wizardry WhiteBox again. I think over the past two years or so the OSR community has really seen an explosion in material for WB and WB-based games - and that's awesome.

I say that not just as a publisher, but also as a fan of this rules light game. From its stripped down astetic, to its ultra-simple rules set, to its seemingly infinite hackability, I can safely say its my favorite game in the OSR. But I think my love of WB doesn't really come from any of the things I mentioned above. I think it comes from the seemingly boundless creativity it creates in those who design products using it as a base.

In addition to my little sci-fi game, White Star, there are also a shit ton of WB-based games that are bent to different genres. +Bill Logan's White Lies is modern espionage. Sleeping Griffon has published Skyscrapers and Sorcery, which brings modern fantasy into play. +Pete Spahn just released WWII: Operation White Box, a historic incarnation based around World War II. I think it's only a matter of time before we see Cosmic Horror, Cyberpunk, and other genres bolted onto the White Box design elements.

But at its core, Swords & Wizardry: White Box is a fantasy RPG and many releases don't go far from that. Whether it's a heavily modified and expanded version (like The Hero's Journey) or a cleaned up version of the original with excellent layout and a few expanded rules like Charlie's White Box, both games hold close to the fantasy origins of the game. +Vincent Florio and +Brian Fitzpatrick published a more Conan-esque collection of adventures in their Lost Age Adventures line of products - something which I hope they return to some day. I've also had some success with more traditional supplements for fantasy, with my own line of White Box products.

In short, I think we've seen Swords & Wizardry: White Box go from an oft-mentioned but rarely utilized game to an active force in the OSR over the past two years or so. Mason's White Box brings a professional design element to that game and I think he's leading the charge for this game. It's my belief that Swords & Wizardry: White Box has finally stepped out of the shadows and is a game that will be played and enjoyed for years to come thanks to so many creative people grabbing hold of a simple set of rules and saying "You know what would be fun to do with this?" and then doing it.

Oh, and I love the fact that the vast majority of White Box-based games put in print are done so in digest format. Easy to store, transport, and reference at a table - and they don't cost $22,100 on eBay.
Posted by James M. Spahn at 11:54 AM 3 comments:


Well, because I had to. And you know what? I'm glad I did it. I still have a huge PDF collection thanks to OBS and as a player, PDFs suit me just fine. Aside from that I did some cold, logical thinking. My brainspace when something like this:

Brain: "Well, James, what genres do you tend to run?"
Me: "Sci-fi and fantasy."
Brain: "Alright, what are your favorite sci-fi and fantasy RPGs?"
Me: "Star Wars, obviously."
Brain: "Duh. What else?"
Me: "Well, everything else I'd want to run in an ideal world can be done using White Star or The Hero's Journey. They were written by me, so they suit my style of DMing."
Brain: "OK, so, what other books do you need?"
James: "Well, I should hold on to books for game lines I regularly freelance on. That's a workplace reference, if nothing else. Also, as a point of pride I'd like to hold on to The One Ring and Rocket Age, since I'm really proud of the work I did on those game lines."
Brain: "Makes sense. What about the other stuff?"
James: "I really like it."
Brain: "And do you stop liking it because you no longer own it."
James: "No, but-"
Brain: "But what? Your memories don't go away just because you don't own the books anymore."
James: "But the Rules Cyclopedia is so cool!"
Brain: "Yep. It sure is, and you haven't opened it in five years. Does you owning it make it somehow cooler?"
James: "No, but-"
Brain: "James, buddy, you're not a collector. You're a gamer and a creator. Stop trying to be a collector."

So, I did just that. And I feel good. I own the books for EXACTLY the games I want to run and no others. That reminds the obligation of my player saying "But we want to play <insert game on my shelf that I'm not into running>," and me feeling obligated to accommodate them. "Sorry gang. I run White Star, The Hero's Journey, and Star Wars. If someone else wants to run something, I'll play anything anyone wants to put on the table - but that's what I run."