Swords & Wizardry began as a simple fantasy game. But from humble origins, it has grown to become something truly special in both the OSR community and RPGs at large. That comes from being built on a solid, yet simple foundation. Swords & Wizardry WhiteBox clocks in at under 30,000 words - and there's a lot packed in there.

From this framework, infinite stories can spring. But what past year has shown us is that these stories are not bound in the realm of fantasy. It's gone from a retro-clone to a foundation upon which nearly any story can be told.

White Star (linked here at 50% off the PDF purchase for April 17th only in honor of Swords & Wizardry Appreciation Day) took Swords & Wizardry out of the fantasy realm and into the stars. When it was released a little less than a year ago, I didn't expect my simple idea of "What if the original fantasy RPG had a sci-fi game instead?" to become the success that it has become. At first, I thought it was a fluke. A kind of lightning bolt moment that would come and go. The one-in-a-million shot.

But I was wrong.

Soon after White Star we saw Swords & Wizardry go in new, fantastic directions. Directions I never would have thought of in a thousand years. Each of them is a testiment to the universality and strength of Swords & Wizardry. 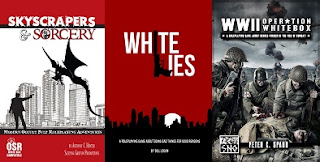 Skyscrapers & Sorcery, by Anthony C. Hunter, takes fantasy into the modern era. Heroes armed with modern technology face off against dragons, giants and other mythic creatures. Magic is real, active, and dangerous.

White Lies, by Bill Logan, is another modern game built upon the foundation of Swords & Wizardry, but this time players take on the role of spies, assassins, and black ops specialists. It's a game built on the slick stylized images of James Bond, Remmington Steele, and Mission: Impossible. That's a far cry from S&W's fantasy origins - but the core rules remain the same.

The soon-to-be released WWII: Operation WhiteBox, by +Pete Spahn, moves even further from these fantasy foundations and will be telling harrowing and heroic tales of the men and women who fought the greatest and bloodiest war against true, real-world evil.

Each of these games is something unique, but all of them are built upon the same rules and each of them works for what they seek to accomplish. This is a credit to the sheer strength of the core rules which inspired each game.

Not only are the rules strong, they're also flexible. Swords & Wizardry variants are showing up, each of them taking their own spin on it. 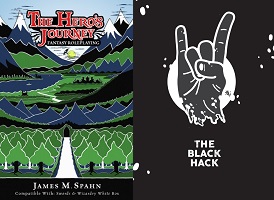 The Hero's Journey Fantasy Roleplaying stands firmly in the realm of fantasy, but evokes imagery more akin to fairy tales and Tolkien sensibilities instead of the more commonly associated ties to the pulp literature of Howard and Lieber.

The Black Hack, by David Black, tears down Swords & Wizardry WhiteBox even further, to its bare bones - and yet still functions (and even shines) as a game. Its supplements show the beauty of its simplicity and how even when paired down to its barest core it remains a fantastic game.

Each of these games is a powerhouse in its own right. But each of them is built on the strength of Swords & Wizardy, and as I said last year - that is a gift.

To celebrate Swords & Wizardry Appreciation Day, Barrel Rider Games is pleased to announce the release of its next PDF Supplement for White Star: The Brimling. 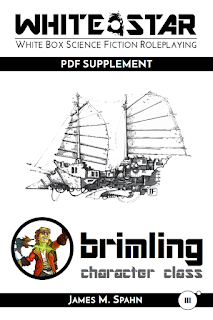 This full, seven-level class brings diminutive space pirates to the stars, where they travel aboard great space galleons in search of the most valuable plunder in the galaxy: A fine meal. These whimsical freebooters lead a crew of scallywags by their bellies and live in fearless joy as they seek for the next source of a full belly.

From a design point of view, they are an effort to bring halflings into White Star without simply shoe-horning them in. Halflings for me have their origins in Tolkien's hobbits. Well, what would drive homebodied, hearth-loving halflings to take to the stars and still be fun? Well, what else? FOOD!

That's the beauty of Swords & Wizardry. You can take it and make it into exactly what you want - and you can do it all just for the fun of it.
Posted by James M. Spahn at 4:04 AM 3 comments: