Tell an adventuring party that there is a lich stowed away in a haunted castle atop a high cliff with an endless horde of undead servants between him and the player characters and they'll charge off with holy symbols raised and swords drawn. Let them hear rumor of an ancient dragon who has turned countless would-be thieves into a pile of ash before casually returning to its slumber, and they only see magical trinkets and shining jewels. In over 25 years of gaming, I've discovered two words that strike absolute fear into adventurers from Oreth to Toril, from Krynn to Mystara: Rust Monster. 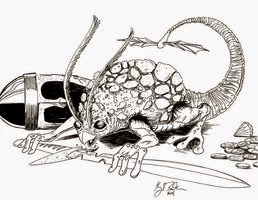 Most players seem to feel like Rust Monsters are the DM's attempt to take a "cheap shot" of parting the player characters from their gear. They flail, they panic, they complain, and of course they swear.The thing is, I feel like all this malice towards the DMs who use Rust Monsters is a bit unfair. I've always felt that this monster is a perfectly valid, perfectly fair monster to use against a party - regardless of level.

Yes, they destroy precious swords and armor - even magical ones! But they're more than just an easy way to part a party from their arsenal. The true danger of a Rust Monster lay not in the creature itself, but a party's reaction to them. Rust Monsters are not, by nature, aggressive. Their attack does not even inflict any damage. The touch of their antennae destroys metal objects instantly, but causes no damage. These two traits mean that in most circumstances the party is under no obligation to fight these feared creatures. They can run away and plan an ambush, prepare ranged weapons such as slings or bows, or even cast a few magic missiles or fireballs to deal with a Rust Monster.

A Rust Monster is a creature who is so feared because he forces player characters to think outside the box. They can't simply kick in the door and attack the monster. Instead they're forced to think tactically and truly consider the nature of their current situation. In my own observations, more experienced (and level-headed) players are able to handle these creatures without too much panic. It's the players who rely on the same old song and dance when it comes to monsters that over-react.

What does this mean as a DM? This means that the Rust Monster (and other unorthodox creatures) can be used to gauge exactly how comfortable and knowledgeble your players are with their given characters, as well as how confident they are. Confidence is important, but if its untempered it can become arrogance. But when it comes to things like Rust Monsters, arrogance leads to a naked adventurer.

So, as a DM, I say go ahead and use the Rust Monster. Sure, your players will probably piss and moan - but more importantly, they might learn something about their character and themselves. 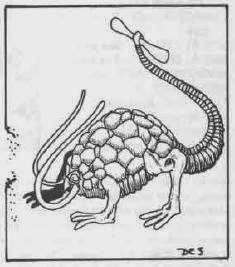