In most D&D-based fantasy RPGs magical items are given a simple numerical value to reflect the power of the enchantments laid upon that object. You have a Sword +1, or a Ring of Protection +2. It's simple. It's quick. It's clean.


It's also supremely boring. Magic is by its nature, an exotic thing that exists outside the norm. It is meant to evoke fear, inspiration, and most of all wonder. Magic is, in most fantasy settings, a mystical force of nature that is inherently part of the world.
So when magic items are reduced down to simple numeric values, they become little more than power tools to enhance a character. They become, in effect, disenchanted. They lose their mystique and, well, their magic. This has always bothered me about D&D magic items because it creates a revolving door. Why bother holding on to a measely +1 sword when you've found a bright new +3 sword?

That has always bothered me because the creation of magic items can take years, thousands of gold pieces in resources, exotic components, and the efforts of a powerful magic user. This means that one is not going to create a magic item without a specific purpose and where there is a purpose there is a specific story.

In my mind, this means that every permanent magic item should have some kind of story or background to it. This gives the object a place in the history of the world and makes it more than a simple +1 weapon. Now, it's all fine and good for the referee to know some basic history on these magic items, but that doesn't do much for a player. However, if players can discover even a snippet of this background they're more likely to recognize the value of this item because it's gone from being "another magic sword" to being a "historic artifact." 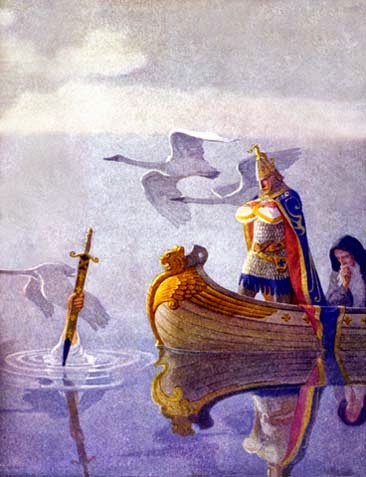 Excalibur isn't remember because it's a "+5 Holy Avenger." It's remembered because it's the sword of King Arthur, kept in the stewardship of the Lady of the Lake and is the symbol of all that is noble about the Knights of the Round Table. The One Ring isn't just a Ring of Invisibility, it's got a rich history that has influenced the fate of Middle-earth. A lightsaber isn't just a "laser sword," it's a symbol of the fallen glory of the Jedi Order. Harry Potter's Marauder's Map isn't just a creative use of scrying magic - it is a gift from Fred and George Weasley and was used by his own father before them. These objects are invested in the history of their settings and thus invite players to invest themselves in both the world and to care about the magic imbued in them because that magic has had an impact on their world.

This is all well and good, but as players level up their characters, they're going to want better loot. So how does a referee balance that sense of depth and history in their campaign with the statistical improvement of the gear that players carry while they level? Personally, my preferred method is to actually modify the treasure hoards found in dungeons. Remove certain magic items that are more powerful than the characters currently have, but in return discuss with those players the option of increasing the power of their chosen magical items. So that +1 mace they got at 2nd level is a +3 mace at 7th level, or even a Mace of Disruption at higher levels. Perhaps these increases in the power of these objects are tied to the heroic accomplishments of the wielder so that the weapon grows in power as the legend of the character also grows.

In short, magic items are more than just simple modifiers on a sheet to a mundane object. They're historic artifacts that have lived through the ages of the world or specific creations designed for a purpose; the more they are invested in your world the more the player characters will be invested. They should be treated as such, and not just pawned off when it's time to divide up the next pile of loot.