Review: Guidebook to the City of Dolmvay

This review has been a long time coming and my apologies for the delay. Real life responsibilities have been taking up a frighteningly large portion of my time, so I beg your pardon in this matter. Today's review is also on a huge product: Small Niche Games' Guidebook to the City of Dolmvay. This book was funded through a Kickstarter a few months back and in hindsight, I wish I had thrown a few dollars at Mr. Spahn's endeavor because the product is clearly a labor of love. Also, it's a mammoth book, clocking in at 223 pages. The cover is color while the interior is filled with black and white line art that's evokes that old school feel. This book feels like something you'd find on the shelf of the local comic shop back in '83, and that's a good thing in my humble opinion. 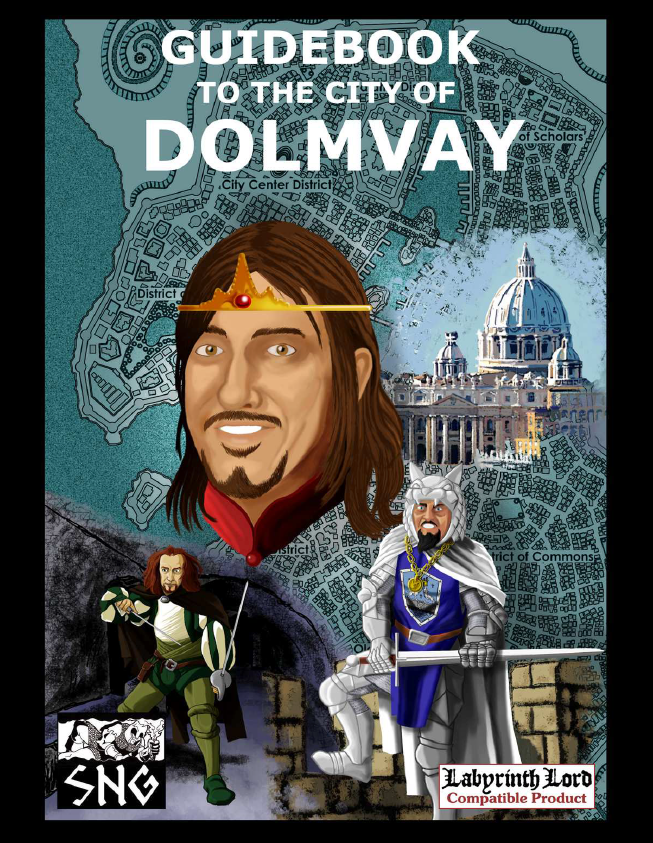 The city is the great metropolis of the world of Amherth, Small Niche Games' iconic setting. Think Waterdeep of Forgotten Realms fame or Palanthas from the world of Dragonlance. At least that's the vibe I got when reading through the material.

Before Spahn even gets to actually detailing the setting material, he goes out of his way to thank his Kickstarter supporters. In addition, he goes out of his way to state that the vast majority of the material found in Dolmvay is open gaming content. That means authors are free to take most of the material found and make it their own, both personally and professionally. He simply asks that publishers wishing to produce commercial material based on Dolmvay respect some of the aspects of the world of Amherth that make it unique. In short, Spahn is inviting all the tiny OSR publishers out there to come play in his sandbox. This, combined with thanking his Kickstarter supporters in the first pages of the book gives the author a sense of humility. He seems like just another guy in the table and that gives the whole book a sense of approachability.

The Guidebook to the City of Dolmvay seems built specific for the purpose of adventuring. It's not a static location you watch. It's a city where adventurers show up and change it forever. To this end, Spahn begins by briefly introducing the reader to the major groups that are the movers and shakers of the city.

The Church of Law and Order feels like the cornerstone upon which Dolmvay was built. They're a powerhouse in the city and at least as powerful as the nobility or royalty of the city. Spahn doesn't hesitate to remind the reader that the church is filled with people and people aren't always good and noble as the religion they follow. The Church is a complex beast and very politically motivated. It's definitely reminiscent of the late European or early Renaissance Catholic Church.

The Guilds of Dolmvay are similarly portrayed as a complex collection politicos who have become economically powerful enough to begin muscling in on the way the city functions. This, combined with a bit of info on the Noble Houses, the economics of the city, the upstart merchant princes and the royalty creates a political web of intrigue that allows you to add a kind of Machiavellian Game of Thrones element if you want to break up the dungeon crawls. Also, this gives player characters something to do when they hit name level and start wanting to build strongholds and gather followers.

We get a few pages on the history of Dolmvay, but it's not some endless dissertation. The author seems very clear that the setting is meant to be "in the now," as it were and that while Dolmvay didn't spring from the ground whole and full that what truly matters is the present day and the player characters.

Following the history is a brief overview of how the laws in the City of Dolmvay function, particularly crimes and their punishments. I have to admit the punishments seemed draconian, but realistic and seemed that some of the harsher punishments might help prevent more aggressively minded PCs from running rampant across the city. Rules for indentured servitude and trial by combat were particularly interesting.

The Dolmvay currency is given a few paragraphs, which continue to show how the Xannen Empire continues to permeate the world of Amherth, even to this day. The holidays and calendar year are given and they are dominated by Saints Days of the Church of Law and Order that are parallels to many modern holidays of the real world. At first I didn't like how much of the material in Dolmvay is a slightly altered or changed aspect of the real world, but it grew on me and I realized that it makes it feel more approachable to new gamers. After all, Middle-earth uses the modern calendar, doesn't it?

Finally, we get to the real meat of the Guidebook to the City of Dolmvay: The people. A city is defined by its citizens, and Dolmvay has no lack of those. You get all kinds of wonderful details. Rumor tables, styles of dress, traditional greetings, body language and gestures common amongst the citizenry, common phrases (including insults, of course!) - these are the pages when the city really seems to finally come alive.

Now that the city has its people, we need to know where and how they go about their business. Dolmvay continues to come alive right off the page in this section. The city itself is divided into two huge wards, separated by the Dolm River which cuts through the heart of the city. Each of these wards has numerous districts and each district is given extensive information. Countless locations and NPCs are provided, along with general details on often overlooked details like whether or not parts of the city are lit at night to water and sanitation. The amount of information given in these pages really makes Dolmvay feel like a genuine, lived-in city. It reminds me of Skullport, Undermountain and City of Splendors and Volo's Guide to Waterdeep, all wrapped into one. The amount of material presented here is enough for several campaigns worth of adventure.

Next we get a break down of different factions within the city and some stock NPCs associated with them. From military organizations to demi-human activist groups to religious cults, Dolmvay is definitely a diverse place with a great many groups each out for their own ends. Then we get several pages of different businesses that operate in the city. Mo specific details are given on individual business are given, only the types of businesses that operate within the city. This is done, I believe, to allow the referee to customize things to suit their individual campaigns.

Now, what does get a little more detail are the inns and taverns of Dolmvay. Spahn goes into the average price of food, drink and lodging in the city as well as providing some local culinary delights and favorite beverages. These kinds of little touches are what keep the city alive and vibrant. It's generic enough to easily fit into almost any campaign, but unique enough to feel real. The reader is provided with a dozen example inns and then is left to fill in the rest of the city as they see fit to the needs of their own group.

And what's an old school supplement without a few random encounter tables? There is one generic random encounter table that can easily be used at any location in Dolmvay, or there are several tied to specific wards and districts through out the city. This gives the referee a certain level of flexibility with the dice without being too repetitive.

Next we get a bestiary, which is no surprise. (And yes, alligators do live in sewer). A few unique takes on some classic creatures are given, which is to be expected. What isn't expected (but should haven been, since I've read Chronicles of Amherth), is some of the new flora. I have to say this kind of thing always makes me smile. Plants are so often ignored in fantasy role-playing games, particularly their effects on people - and herbalism was such a vibrant part of life in those days.

We come now to the Appendices. The first of these is the Valenon, which is a kind of City-State within the city of Dolmvay. Think the Vatican for the Church of Law and Order and you're on the right path. It gives fewer details on how that city state is set out geographically and instead provides a great amount of detail on the Church of Law and Order. From the hierarchy of the church to some of their specific beliefs, I really enjoyed this section because it gave a great amount of detail while still showing the church as an organization of people - and people can be foul or fair, just or corrupt, compassionate or cruel - especially those in places of spiritual power.

The next organization that gets a wonderfully detailed write-up is the Adventurer's Guild. As previously stated, I'm not normally a big fan of these types of guilds in fantasy role-playing. However, the write-up here makes sense and to be frank it just feels so cool. A detailed overview of how the guild functions, different positions and factions within the guild, its services and expectations for members and even a complete map of the guild hall. Being part of the Adventurer's Guild just seems like it would be just plain fun.

And what would a great metropolis be without sewers filled with all kinds of nefarious monsters? Well, I can tell you that city wouldn't be Dolmvay. A collection of stock encounters, maps which can be arranged to create unique dungeons and a few nasty surprises for your players a referee can find quite a few options to keep their players entertained (or entombed) for quite a few adventures.

In the closing pages of Guidebook, we find some quick-creation rules for NPCs. Names, mannerisms, appearance, personality - it's all covered. What's especially clever is there are rules for actually playing 0th level PCs and what it takes to bring them up to 1st level. I love this kind of stuff, as it really gives early players a sense of accomplishment when they "earn" their class. This combined with some random treasure charts to help referees quickly determine what characters might find in someone's home within the city,

The last pages detail the limits of the shared world aspect of Guidebook to the City of Dolmvay, which are few. Pete Spahn is being very generous with his material here, inviting everyone to come play with his toys.

I seem to have to forgotten Tim Hartin's amazing city map. Like the rest of the supplement, it evokes that magnificent old-school feel and really gives you a sense of the city. 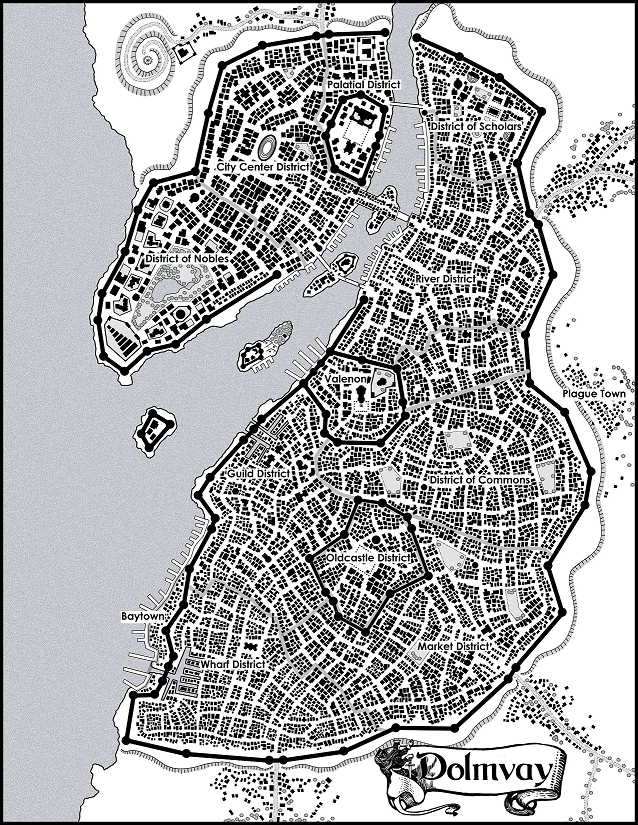 So, at 223 pages, is Guidebook to the City of Dolmvay worth getting? Well, considering the price point is "Pay What You Want," I'd say a resounding yes. After reading the PDF, I immediately plunked down the $20 for the physical hardcover and I don't regret it for a second. If you're trying to save a few bucks, but still want a physical copy there is also a softcover available for $13.00. This book is absolutely, 100% worth it. The physical hardcover is great production quality with a sturdy gloss hardcover and thick pages. Also the Special Edition/Hardcover includes the adventure Oak Grove Whispers, which I haven't yet read -  but still, a free module is a free module.