Haunted Halls of the Beggar King Preview, as stated in the title, is a PDF preview of the forthcoming module of the same name (sans the word "preview") to be pubished by GP Adventures. It is written by Ernest Gary Gygax Jr. and Benoist Poiré. The cover art is a classic painting by 19th century french illustrator Gustave Doré. The adventure is designed for a party of 3rd - 5th level characters using any of the "First Edition" old school clones, like OSRIC or Labyrinth Lord (with the help of the Advanced Edition Companion). 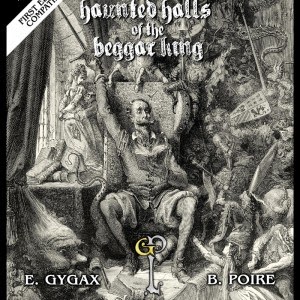 This 38-page PDF is billed as a preview, and that's exactly what it is - though it's quite playable and can easily be the source for several sessions of classic high adventure. It's clearly got the feel of being a "rough cut" or "first draft," but don't let that turn you away from the content - because that content is superb. When I say rough cut, I really mean it. This feels like a referee digitized out their personal adventure from a convention game and made it available for the world to see. The layout is that of a simple text document with an easily readable font and no art. There are even still a few typographical errors in the text and some misplaced stats. Given this kind of presentation, some might feel slighted by the $4.95 price tag for an unpolished product, but the content is superb. These men clearly have a deep knowledge and love of the art of the table-top role-playing game and they manage to weave a module that is both familiar in presentation and new in the threats that it presents.

Beggar King hints at being set in a larger world, but never tries to box-in a referee. Instead, it gives a kind of broad overview of what could be the background of the adventure and lets the referee make the final choices of how to implement what is presented into their own campaigns.

As I read through it, I was constantly reminded of Temple of Elemental Evil. That's not to say that Beggar King is a rip-off of T1-4, quite the contrary. It's fresh and original, to be sure - but it has the feel of a module I would have picked up from my FLGS back in the mid-80s. The fact that it achieved this feel without any art or layout to speak of screams volumes to the authors' proficiency when it comes to creating adventures. Not once do you feel like Gygax and Poiré are saying "look at us, we're so old school" or try to push the name Gygax as a selling point. Instead, they let the material speak for itself. It's almost like they're trying to intentionally avoid drawing attention to any frills to showcase - often in spite of the simplistic, rough-shot design.

The adventure itself has everything a gamer could ask for. It's a dungeon crawl to be sure, but one with depth and culture. The NPCs are there for a reason, with their own motivations and concerns. They don't just wait for some player character to kick in the door and nab the treasure over their bloody corpse. The halls of the Beggar King are a living, breathing place with mysteries that not even its inhabitants understand. Also, not every monster is there to be slain. Many can be negotiated with, and that is specifically addressed in the text. This breathes life into the module, instead of making it feel like a paint-by-numbers hack and slash fest.

Because the NPCs are smart and active, the players will need to be the same. While the challenges here are absolutely suited to characters between 3rd and 5th level, that doesn't mean they're going to be easy. Players will need to be cautious, clever, and maybe a bit lucky on ocassion - and that's how it should be. Remember kids, not every monster needs to be fought or killed, and sometimes discretion is the better part of valor! But, the rewards are worth it for the clever and brave.

Also, for the price of admission, you get a lot of dungeon. Almost 120 rooms are waiting for hardy adventurers and the surprises I found were great. From the offering plate of the Shining God to Powell Alferson, the unaware paladin, the adventure is full of diverse content that all fits together nicely. In addition to the individual rooms being filled with all manner of challenges great and small, the dungeon has no less than four factions jockeying for power. Again, the haunted hall is a living, breathing place.

The one piece of original art worth noting is dungeon map. It's a full color map that looks like it came right out of a three-ring binder. Done to look like it was designed with colored pencils, its easy to read and radiates charm. It's a real jewel.

That's not to say Haunted Hall of the Beggar King isn't without its faults, though if the reader remembers that this is a preview, a certain level of forgiveness can be offered. Again, the formatting and sometimes mislabeled or absent material may turn off gamers who expected more spit and polish - but to me the content itself more than makes up for that. One thing that I noticed was the specific absence of experience point rewards for the monsters in the adventure. While the referee can certainly look them up in whatever bestiary they might have on hand, that kind of convience is always nice. Also, this kind of thing is a necessity for some of the unique monsters featured in the dungeon. Some of the locations in Beggar King Preview says "further details on this location will be given in the full release of the product" or similar remarks. While this certainly leaves the area open for referee creativity,  it can feel a bit half-hearted to more picky readers and given that you've laid out a few bucks for the product that's understandable.

All in all, Haunted Halls of the Beggar King Preview is a solid purchase and is available for $4.95 in PDF at he GP Adventures website. It will definitely provide several nights of solid adventuring for players and referees alike, though I'd recommend to those running it that they absolutely read through it ahead of time and make notes where the text makes some sweeping statements or says info will be detailed in the full release. Because of that, I wouldn't really recommend the preview product for new referees or those looking for a "quick and easy" module. This is a glimpse into the mind of two mad masters of role-playing and it comes with a few dashes of chaos because of that. However, it's absolutely worth the effort and once it's got a bit of polish and some more solid editting to it, it has all the hallmarks of standing alongside other great mega-dungeons like Barrowmaze and Stonehell. It's got all the signs of being worthy of the name Gygax, if I can be a bit grandiose.

As a final note, this preview is does not encompass all the rooms that will be featured in the complete Haunted Halls of the Beggar King. The complete adventure will feature two additional sub-levels which are likely to be as equally vast, deadly and clever as the one featured in the preview. In addition, a surface map will also be included which will likely detail the wilderness and local area surrounding the haunted hall itself.
Posted by James M. Spahn at 8:38 PM