Kingmaker is a short adventure for Labyrinth Lord or OSRIC both written and illustrated by Eric Jones and published by Ludibrium Games. It clocks in at a mere 18 pages, including covers and OGL. It's written for 2 - 8 1st level characters. Don't let the unassuming pencil art or small page count fool you, Kingmaker has a lot of stuff crammed between those covers. 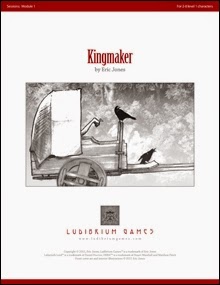 I have to say, this is one of the most original adventures I've read, especially among those written for fantasy role-playing games. Unlike almost every other adventure out there, Kingmaker manages to break the mold in so many ways. It paints, in broad strokes, an excellent backdrop upon which the story is laid. NPCs are given brief, write-ups that give the referee a strong sense of how to play them but provide the freedom to customize each individual character to their own campaign. This isn't a simple "kick in the door, kill the monster, and get the loot" adventure.

Kingmaker starts with one of the most cliche tropes for low-level characters. They're hired to serve as caravan guards. I know what you're thinking: "Ho hum, nothing new there." In a certain sense, you'd be right. But the care put into the NPCs and the setting really make this adventure feel alive. This adventure doesn't wait around for the PCs. It's a living breathing thing.

Instead of a traditional dungeon crawl or collection of "monsters atack the cavaran" cookie-cutter encounters, there's a real story here - which I'll not to spoil. Through the course of Kingmaker, players are likely to find themselves getting invested in the events around them and coming to develop real role-playing experiences that may shape the fate of both their characters and the kingdom in which the module is set. This is one of the few modules on the market that allows low-level characters to organically impact the greater arc of a nation -and that's a rare and magnificent thing.

The encounters in Kingmaker are balanced, but require characters to be intelligent and cautious. Not everything is meant to be fought and losses will occur. It really hammers home that adventures take their toll, both in terms of resources and in terms of psychological impact - and not just on the PCs. The fate of the NPCs hinges on the the actions of the player character - and with a deeper impact than that of whether or not a set of stats are reduced to zero hit points.

Kingmaker is a fantastic campaign openner, especially for gamers who are looking for something that is both tradtional and new. It doesn't have the rooted, developed central location like Brave Halfling Publishing's Larm, but instead trades that for NPCs that you can care about - and that can have a far greater impact on your campaign.

Published by Ludibruim Games, Kingmaker is available for digital download PDF for a mere $2.95 on RPGNow or DriveThru RPG and I highly, highly, highly recommend it. It was lovingly written and illustrated by Eric Jones.
Posted by James M. Spahn at 9:48 PM