I got a chance to play with a group of my old OSR buddies last night, and man was it a blast. I found my "playing for about 2 - 3 hours sweet spot" discovery to continue to hold true and the casual nature of my fellow players kept the mood light, while the experience of those at the table allowed for there to be enough focus for us to progress in the plot. There was, however, something new to me: The game played: Low Fantasy Gaming.

LFG was something that rang a bell in the back of my mind, but I'd never pursued it. I figured "Oh, just another retroclone." Well, the reason it kept sticking out in the back of my head was because +David B kept singing it's praises (and believe it or not I pay attention to that fool). When I found out that LFG was the game being played, I was like "Sure, whatever." and didn't give it much thought. But pretty soon, my expectations were blown away. LFG is way more than "just another retroclone." 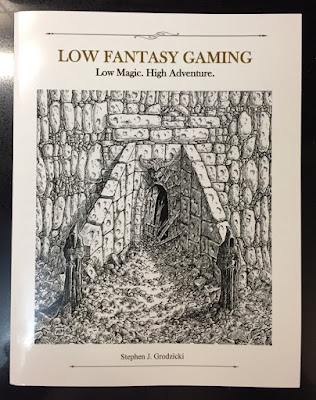 I went to the Low Fantasy Gaming website and downloaded the PDF, which is free by the way. I was immediately impressed by the quality of the production - especially for being free. The book is chock full of black and white line art and set on a nice parchment style paper. It's easy to read, and evocative. The clean two-column layout is easy to read and flows like fresh water.

LFG lives up to its name. This is not Forgotten Realms. The core rulebook has just five classes: Barbarian, Bard, Fighter, Magic-User, and Rogue. While it includes rules for playing Dwarves and Elves (using a race-and-class basis), these are very optional and it is generally assumed that all PCs are human. Magic is rare, dangerous, and something not meant to be messed with. The game repeats over and over again that magic is not common. As someone who prefers low magic, this is a huge strength in my eyes.

The game's mechanics clearly have their roots on OSR-style gaming, but make regular use of the 5e Advantage/Disadvantage mechanic. With a lower instance of healing magic, player characters find their hit points increasing with a stronger center baseline. Fighters, for example, roll 1d5+5 per level. The game does make use of some particularly funky dice (like d5s and d30s), and while that might be a turn off for some folks, I didn't mind. Given all my gaming these days is happening on Roll20 and that I've got a few sets of DCC dice, it wasn't even a thing. It also has a skill system that's robust enough to covert most situations without being bogged down in detail. If you have a skill, you get a bonus when making an attribute associated with that skill - that's it. 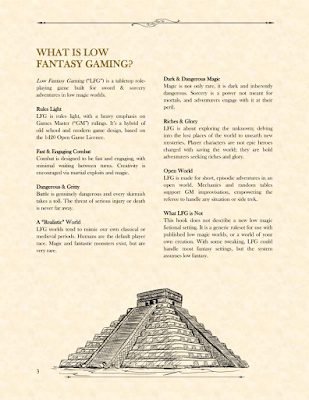 Attributes themselves are handled a bit differently. The game has seven attributes. Six of the attributes we all know and love are present: Strength, Dexterity, Constitution, Intelligence, and Charisma. Wisdom has been split into Perception and Willpower, which I think is a smart move on the part of the creator.

There are no saving throws. Instead you have a Luck score, which begins play at 10 + Character Level. Luck and attribute checks are made by rolling 1d20 and scoring under the associated number. But, in the case of Luck, each time you make a Luck roll, your Luck temporarily drops by a single point. It's simple and quick and shows how long term adventuring can take its toll on even the most skilled adventurer. In addition to Luck, characters also begin play with a Reroll Pool equal to their level. This is, quite simply, a number of times you may choose to reroll a d20-based roll in a gaming session. It's a simple way to keep yourself from being hosed by one bad roll.

Both the magic and the combat system have a bit of seasoning from Dungeon Crawl Classics. Any combatant (not just Fighters) can engage in minor and major exploits in combat and whenever a spell is cast the mage runs the risk of drawing some dark and terrible thing down upon them. It makes casting spells a real risk. Speaking of spells, gone are the "High Magic" spells of traditional games. You're not teleporting anywhere, bub. You're also not bringing anyone back from the dead.

But, if you're lucky, an ally who seemed slain at the end of a battle might just be Mostly Dead (yes, that's a term in the game). Brushes with death come at a cost, though - and you're likely to suffer a battle scar or permanent injury. In a world without a lot of healing magic, combat is dangerous and deadly. It's effects are lasting. There are rules for chases too. This seemed strange at first, but I like it - because "We run away" should not immediately mean your player characters are safe. 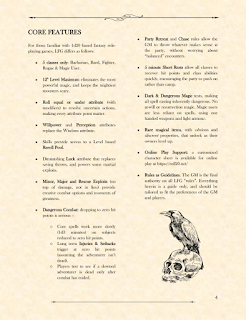 LFG has no default setting, though it openly says it's not meant for highly magical campaigns. Inspirations include settings like Westeros and Hyborea, or even Middle-earth. The low-fantasy elements are reinforced once more by a level cap of 12th level. This puts characters firmly in the "hero, not walking god" category, which is a nice touch. Gaining levels are not done via XP, though. It's largely based on having extended downtime and GM fiat. While this might bother some gamers, I like it. It means characters aren't going to feel hosed if they didn't fight any monsters or find any treasure in a given session.

Ever since D&D 5th Edition was published, many in the OSR community have attempted to do an "O5R" game. Low-Fantasy Gaming is the perfect blend of OSR gaming and 5th Edition mechanics. It's not afraid to draw from multiple sources to create something that's truly unique, infinitely playable, and easy to pick up and run. +Steve Grod, the creator of LFG, has made an absolute gem of a game. He's also made this gem of a game very, very accessible. The PDF is free on LowFantasyGaming.com and print versions of the game (both hardcover and softcover) are available at an at-cost price on Lulu. More over, he actively supports his labor of love with quality PDF supplements which he posts on the LFG website. New classes, new adventures, and sandbox settings are added regularly.

The long and short of it is that Low Fantasy Gaming is a game that's been in front of my face for a long time and its somehow been unnoticed. It captures the dangerous low-magic flavor of OSR gaming that I love so much, but weaves many modern mechanics into the design to create something that is both familiar and new. I'm very, very excited to see what the future of FLG is going to be and even more excited to get together with my Saturday Night Crew to continue the adventures Low-Fantasy adventures of Esteban de Silva, el Ladron de Flores - and I haven't been excited for an upcoming gaming session in a long, long time.