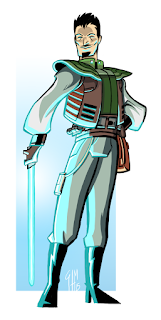 "Challenge accepted." Don Diego Astronomo's perfectly waxed moustache lifted in a sneer as he ran a single gloved hand down his cheek where Captain Orion had struck him. He was no man's fool and such a public outrage would not go unsatisfied from the likes of this rabble.

Orion's blue eyes flashed when he realized what he'd commited himself to in a moment of anger. He steeled himself. Perhaps Astronomo would choose pistols, mono-swords or fisticuffs. But in his heart, the Captain knew it was futile. Astronomo was the best duelist in the Sterling System and here at Lord Adlar's christening ball for the new Galatus Space Station, Orion was about to be made into an example.

Three words sealed Orion's fate as they slipped cool and calm into the air. "Spada Sabres at dawn."

When the galaxy was ruled by more noble men and Star Knights were not outlaws, a small sect of idle nobles from the civilized star systems of the galaxy took up danerous pursuits. Dueling was common enough among the listless rich, but mono-swords were broad bladed weapons favored by military men and did not suit aristocrats looking to play at being swordsmen. They looked instead to the flashing blade of the Star Sword. But whether it was a simple lack of discipline, a desire not to outright kill one another, or simply wanting to set themselves apart from the more genuinely noble Star Knights, these rich playboys and dilettantes developed a new weapon: The Spada Sabre.

Built in a fashion similar to Star Swords, the Spada Sabre appears to be little more than an ornate sword hilt until it is activated by pressing a small button on its grip. In an instant a thin telescoping rod of metal springs forth from the handle and begins to crackle with electrical energy. The weight of the electrical rod allows those able to wield mono-swords and other modern melee weapons the ability to wield the weapon without the training required to fight with the deadlier Star Sword. 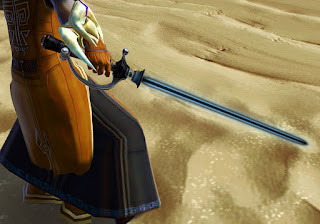 In addition, the Spada Sabre does not inflict deadly wounds. Instead it renders its victim unconscious from the shock. This meant that duelists could play at being warriors and retain their honor without killing one another. Soon Spada Sabre Fencing Academies sprang up across the galaxy and numerous fighting styles were developed. Spada Dueling has fallen out of favor over the years, but among some noble circles it still remains the method of choice to solve matters of honor without bloodshed or death.


*Spada Sabres inflict non-lethal damage. Any character reduced to 0 hit points by a Spada is rendered unconcious for one turn. Spada Sabres can have a "inhibiter chip" installed for an 100 credits, which allows them to switch between lethal and non-lethal damage by flipping a switch on the weapon's handle.

Spada Sabre Training Schools
While many different styles of Spada Dueling exist across the galaxy here are a few examples. A character wishing to learn one of the Spada Styles must find a teacher who is already a Master of the style they wish to learn and earn the right of apprenticeship. Sometimes this can be as simple as paying the required fees, but many Master Spada Sabre Fencers require their students to prove themselves worthy through rigirous training, heroic deeds, or by performing a great favor for the Fencing Master. This is in addition to the listed cost in credits and experience points.
After a character has spent the necessary time and sacrificed the listed amount of XP for each rank in a style they gain the benefits described below when fighting with a Spada Sabre. However, a character cannot benefit from more than one style at any given time - though they can change between any known styles at the beginning of each combat round before initiative is rolled.

Spada and Cloak
When fighting in the Spada and Cloak style, the fencer wields a Spada Sabre in their primary hand while using a long cloak for distraction and deception, keeping their foe off balance. Masters of this technique are even capable of wrapping their foe in the cloak in the middle of combat, immobilizing the target before they move in to strike.

This style focuses on leaving an opponent without a weapon. After all, if an enemy has no Spada Sabre he cannot possibly win a duel. This style is highly effective, but is regarded by many as cowardly and dishonorable. Most practitioners simply think of it as pragmatic an effective.

Astronomo Style
Don Diego Astronomo is regarded as one of the greatest Spada Sabre Duelists in the galaxy. He developed his own style which is focused on a relentless assault that leaves an opponent dazzled from a barrage of attacks and unable to keep up with their relentless foe. Only Don Diego himself teaches the style and only to the most promising and dedicated students.


Pirata Style
Not so much a style as a system of fighting developed by space pirates and Brimlings, Pirata style uses dirty tricks, sucker punches and cheap shots to keep an opponent dazed, confused, and always exposed to new and unsportsmanlike attacks. 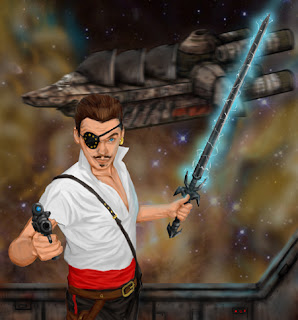