As Sharp as a Blade: The Beauty of Simplicty 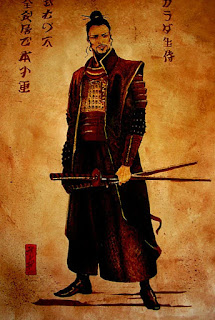 I've been pondering a bit of gaming theory today. In a bit of a paradox I am not a fan of Monks in D&D, but really like Kensai. And what are Kensai? They're really just sword-wielding Monks. So I got to thinking "Hmmm... that's a class I haven't tackled. How would I do it?"

After a few moments of pondering, I realized I didn't need to do it. It was already covered by the Monk class in most games. How? It's simple. You swap out the Monk's benefits that are received while fighting unarmed for the bonuses while fighting with a sword. The sword damage replaces the normal unarmed damage until such a time as the unarmed damage meets or exceeds the weapon damage. At that time, it replaces the weapon's damage. The Monk no longer receives increased damage for fighting unarmed. He is master of the sword now, not of the fist. He is Kensai.

What about the other abilities? Factor a sword in them thematically. Deflect arrows with the edge of a sword instead of the palm of the hand, for example. The other trappings fit just fine. Increased movement, lack of armor, natural AC bonuses, improved physical acrobatics. It works as is. The lack of rules allows for this flexibility. That and the inherent gentleman's agreement and trust between Player and DM/Referee. And that trust holds.