The B/X or Labyrinth Lord Kender 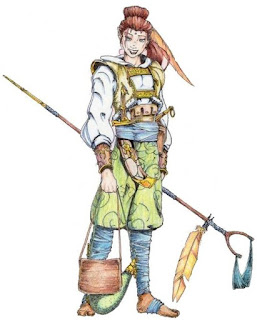 Requirements: DEX 9, CHA 9
Prime Requisite: DEX and CON
Hit Dice: 1d6
Maximum Level: 8
Kender are small, elfin humanoids that primarily reside in eastern Ansalon - though due to an affliction called Wanderlust, are found all across the continent. Irrepressible, fearless, and preptually curious, most other species of Krynn regard Kender as pests. Their combination of youthful curiousity, energetic nature, and the complete inability to feel the emotion of fear makes them natural adventurers. Unfortunately, this curiousity leads Kender to "handle" various objects that strike their fancy. They fearlessly examine, fiddle with, and often break objects that are shiny, magical, or newly encountered. This handling often ends with the Kender unknowingly putting the object in question in their many pouches. It doesn't matter whether the object is nailed down, protected, or even on someone else's person - a curious Kender will absently and unknowingly pocket the item. This is not theft, though most other species regard it as such. For the Kender, the fact that the object is interesting is of surpreme importance and not its monetary value.

For all the trouble Kender inadvertantly bring to their adventuring companions, they are nimble-fingered, stealthy, and quite skilled at picking a lock. These talents, combined with their boundless sense of hope and wonder, can make them surprisingly valuable allies when exploring the dark and terrible places of the world.

Kender rely on their agility and perpetual optimism to survive. They only wear padded, leather, and studded leather armor. They do not use shields. Like dwarves, Kender may not use large and two-handed weapons, but may use any other weapon. They favor a weapon unique to their people, a quarterstaff with a sling mounted at its top. This weapon is called a Hoopak. When a Kender wields a Hoopak in melee it inflicts 1d6 damage and when the sling is used as a ranged weapon it inflicts 1d4 points of damage. Hoopaks are only sold in Kender lands and cost 5 gold pieces.

Keen Senses: Because of their keen senses, Kender can detect concealed doors, secret doors, and traps when they come within ten feet of them with a 1-2 on 1d6 chance of success. If actively searching for these things, they are successful on 1-3 on 1d6. Their sharp senses also makes it difficult to surprise a Kender, and they are only surprised on a 1 on 1d6.

Quick and Nimble: Because of their small size and quick reflexes, all Kender receive a +1 bonus to their Armor Class when fighting against an opponent who is larger than man-sized. They also receive +1 to all attack rolls made when using a ranged weapon.

Fearless: Kender are completely immune to fear, whether natural or magical. It simply does not effect them.

Stealth: As long as the Kender remains perfectly still and can conceal themselves through obstruction or shadows, the remain undetected 90% of the time. If the Kender moves at half their movement rate, they can remain perfectly silent with the same chance of success.

Open Locks: Kender can pick locks as long as they have the tools to do so. They are extraordinarily skilled at this and have a 60% chance of success at first level, and this increases by +5% per level. This ability can also be used to disarm traps, but with only half the normal chance of success.

Pouches: Kender typically carry countless pouches, great and small, in which they store the miscellaneous objects they've acquired in their travels. Whenever the Kender reaches into the pouch, he can produce a random item determined by the referee. Typically, these items are shiny, interesting, or unique - not necessarily valuable or magical.

Handling: Kenders are not thieves and do not knowingly steal. Because of this, they do not have a Pick Pocket skill like a more traditional "thief." Instead, the Kender will sometimes unknowingly pilfer an item from an individual, particularly if that item is interesting or unique. The referee determines exactly when this happens. The Kender's chance of going unnoticed by the victim of this ability is 60% and increases by +5% per level.


Taunting: Once per day, the Kender may spend the combat round verbally taunting an individual target with a surprisingly offensive and creative insults. The target must be able to hear the Kender. That target must then make a saving throw vs. spells or become enraged and focus on attacking the Kender. Because they are infuriated and focused on destroying the obnoxious pest, they suffer a -2 penalty to their Armor Class for 1d6 rounds after they have failed their saving throw.