Murderhobo (noun): The typical protagonist of a fantasy role-playing game, who is a homeless guy who goes around killing people and taking their stuff. The term originated in discussions of tabletop role-playing games by authors seeking to create games aimed at styles of play not supported by traditional games like Dungeons & Dragons.
-Urban Dictionary 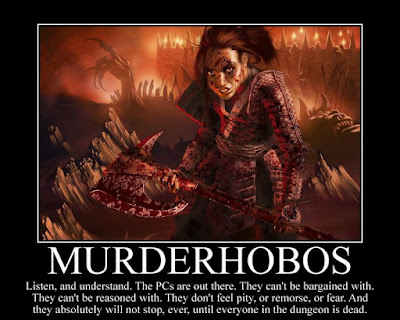 So I was a bit bored today and decided to take a poke at writing some optional rules that allow a DM/GM to implement reputation rules in their campaign. While implicitly written for OSR games and specifically for use with Guidebook to the City of Dolmvay, they're pretty universal and could be used for any RPG.

But it got me thinking: When player characters decide to be a bunch of mercenary murderhobos, does reputation matter at all to them? Do they really give a crap if everywhere they go they're reviled and feared? Heck, some might even like that. I've played with enough gamers over the past 30 years to know that the answer is: not if they're set on playing a murderhobo.

So, this lead me to think about how you stop the whole "murderhobo" thing. Is it even possible? If you have a player whose dead set on playing a homicidal tomb robber who gives no shits, is there an "in game" solution, or a rule that can prevent them from playing such a character?

In the end, I think the answer is "no." Players are going to do what they want to do, no matter what the rules say. However, I think the answer to the whole murderhobo problem is to be up front as a DM/GM about what your expectations are for the campaign and hope your players are honest about what they enjoy in a game. Strong communication can prevent the problem before it ever happens. Often there's a murderhobo compromise, which I call "Our Bastard." I did an entire post on playing "Our Bastard." But that still requires compromise and concesion on the parts of everyone involved.

Don't get me wrong. I'm not saying that being a vile bastard is an invalid style of play. It's as valid as the knight in shining armor, the primarily self-serving mercenary, or anything in between. I do, however, find that running a game with a party full of murderhobos to be really difficult as they can't be motivated by any sense of doing the right thing, and doing the right thing is the implied action taken by the PCs in most adventures. Often it can be very difficult to run on-going campaigns for such characters, as they leave untold destruction in their path and, with enough power and low cunning, most traditional threats become null and void. And I find almost no enjoyment in it as a DM/GM. If you want to go on a bloody rampage, there are plenty of video games that'll let you scratch that itch.


Note: If you want an interesting take on Murderhobos, check on +Jason Paul McCartan's The Murderhobo. It's a Pay-What-You-Want class for Labyrinth Lord and B/X style games. It's got some nice variants to it. That being said, even the author recommends against using it for player characters. However, I think it's a great NPC class for villains and adversaries.
Posted by James M. Spahn at 3:46 PM