Review: Xanathar's Guide to Everything

In spite of not actively playing or running a lot of D&D 5th Edition, I have followed the game line and think that, over all, it's a damn fine outing by Wizards of the Coast. I've been very pleased with their model thus far of releasing only three or four books per year, with the majority of these being long term, large scale campaign adventures. With the exception of the Sword Coast Adventurer's Guide, there haven't been a whole lot of fiddly bits added on to the material found in the Player's Handbook.

Well, Xanathar's Guide to Everything changes that. Clocking in at 192 pages, it's an even split of player focused material, DM focused material, and new magical spells or items. When this book was announced, I was very, very nervous. Was the clean, easy to digest 5e I'd come to respect going away? Were we going to begin that slippery slope into countless and ever more ridiculous character paths ala 3.X's seemingly infinite spread of prestige classes? In a few more years was I going to need three, four, or even half a dozen different books to make a character that followed the seemingly unavoidable power creep that always seems to slither its way into D&D a few years into each edition? 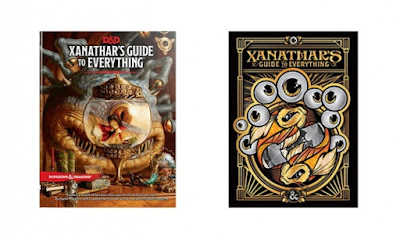 The first 70-some pages of XGtE is new Paths for each class. Fifth Edition D&D already offers a dozen classes and each individual class has two or three paths within it, as presented in the Player's Handbook. The Sword Coast Adventurer's Guide offers a handful of others, but their very specific to Forgotten Realms and number no more than half a dozen (as I recall at the moment). To my personal tastes, that's over three dozen options for focusing and defining your character. I don't need, or want more. But, XGtE has 'em because players like an infinite number of options, even if they know in their hearts that these options will never be explored.

That's not to say their all bad. College of the Sword (Bard), Drunken Master (Monk), Cavalier (Fighter), and Swashbuckler (Rogue) are all brimming with flavor. But several just feel... well.. thin on substance, but long on style. Hexblades (Warlocks), Horizon Walkers (Rangers), and Oath of Conquest (Paladin) all find their origins in third edition with the Hexblade class, Horizon Walker prestige class, and Blackguard prestige class. Sure they look cool, but I don't feel like their presence really explores these classes properly. They feel included for the sake of filling up the corners, as it were.

Second, we have a This is Your Life section which consists of a collection of charts where you can randomly generate your character's motivation, ideology, flaws, and background. While this is good for players looking to flesh out their backstory, it's also excellent for DMs looking to make NPCs on the fly. So, sure, it feels kinda standard to have this sort of thing in books of this type these days - but with good reason, I think.

Next, for players we have some new feats. Now, before you go running in terror like I was inclined to do, I have to remind you: Feats are entirely optional in 5e. This is repeated over and over and over again. Also, there's all of two pages of new feats, and all of them are tied to a character's race. They're solid, with both strong mechanical benefits and a flavorful flourish.

The book then moves behind the screen to the Dungeon Master section. It opens with some clarifications on things like simultanious actions, falling damage, sleeping in armor, and other areas of the game that are either ill defined or can easily bog down play if a group decides to debate such things. Having these clarifications helps keep the game moving, but goes against my general philosophy of "Rulings, not rules." Still, worth having if your group is more interested in the details or you're looking for guidance as a new DM.

Now we get into a long exploration of identifying magic items and spells, designing encounters (and by encounters, it seems implicit that they mean combat encounters), and trap design. I was pleasently surprised to see quite a few pages devoted to in-game down time. What exactly are the players doing on the days/weeks/months between adventures? How does this impact play? What if trouble arises because of their downtime activities. I was really pleased with this section and given the general nature of what's described here, it can easily be cannibalized to any d20-based fantasy game. Spend all your time between adventures simply lounging about drinking? Awesome, recover some lost ability score points. Want to hang out and help the local clergy? Fantastic, you get 50% off the next few spells cast to aid you by a cleric of that church, but watch out - you might get drawn into the politics of the faithful. Want to be a pit fighter? You go right ahead, you'll earn renown and glory -- but you might get your ear ripped off in the process.

Magic items get the full court press in XGtE. From crafting them, to rewarding them, to quite a few new ones - there's a lot to chew on. What I like most here is the fact most of the magic items in this book are very, very minor. The Hat of Wizardry, for example, lets you cast a wizard cantrip that you don't know. But if you fail your Arcana check, you can't try again until you rest. Useful, not terribly overpowering, and offering a nod to the old days of Saturday morning cartoons. A personal favorite is the Cloak of Billowing. As a free action, once per round, you can make the cloak billow out behind you so that you look cool. No real mechanical effect - you just look bitchin'.

New spells? Yep. They're there. You knew they were going to be there. I won't go into it, because it's your standard list of "filling in gaps from stuff we had to cut from the PHB" to "WTF? This is strange. Why'd they include that?"

My favorite part of the entire book is Appendix A: Shared Campaigns. It's basically a few pages on social etiquette at the table between players, suggestions for running a Shared Campaign like those found in the D&D Adventurer's League (or as some in the OSR call this style of play, a Westmarches campaign). It gives recommendations on character creation, gear, simplified rules for rewarding level advancement and magic items. It's very much the "Rulings not rules" section of the book and I thought they packed a lot into 3 pages. In particular, I love the "PHB + 1 Supplement" rule when making a new character. By this rule, for Shared Campaigns, you can only make your character using the PHB and optional material from a single other sourcebook. So if you take Bladesinger from Sword Coast, well then you can't take some Elven racial feat from XGtE. It may seem a little arbitrary, but the amount of book keeping that's eliminated by doing this is well worth it in my opinion.

Finally we get charts with metric boatload of NPC names. Useful, but it does feel like filler.

All in all Xanathar's Guide to Everything really does have a bit of everything. You're certain to find something useful in here, whether you're a player or a DM. It ain't cheap, though, and retails for $50, though online retailers often have it cheaper if you don't have an FLGS. Is it worth the price of admission? Well, I'm not really sure. I grabbed mine at a hefty discount from an online retailer, but seeing as I don't actively play a lot of 5e at the moment, had I paid MSRP I'd feel a bit slighted. That being said, if I was actively playing in or running a 5e campaign on a weekly basis, then I think Xanathar's Guide to Everything has enough meat on its eye stalks to make a worthy purchase.
Posted by James M. Spahn at 8:55 PM