Review: Lamentations of the Flame Princess

If you've been in the OSR for any length of time, you've undoubtedly heard of James Raggi IV's Weird Fantasy Roleplaying Game Lamentations of the Flame Princess. Love it or hate it, people talk about the game. It's one I've avoided for a long time, simply because it didn't seem like something that would appeal to me. I dismissed it as gore for the sake of gore, blood and boobs for the sake of gratuitousness. Basically, it seemed like the "Shock Jock of the OSR." After reading it, I'm not sure that's entirely incorrect - but neither is it a fair assessment of the game. Also, one thing I found kind of off-putting was that I always got the impression that the hardcore fans of Lamentations had the attitude of being "too metal for you."

Then I saw +Matt Finch fantastic YouTube interview with James Raggi. To my pleasant surprise Raggi came off as just a dude. He's no nonsense, honest about who he is, what his game is, and what his beliefs are. I really enjoyed complete lack of pretension. Raggi wrote a game that is his ideal version of D&D, nothing more and nothing less. I can really empathize with that, since that's exactly what The Hero's Journey Fantasy Roleplaying is to me. 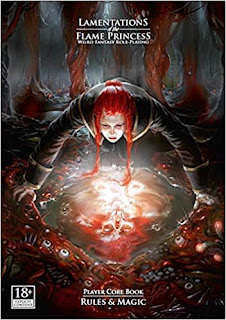 Well, I by windfall, I got my hands on a copy of the "Rules & Magic" Core Rulebook for LofTP and gave it a read. I figured it was the opposite of what I generally wanted in my RPG, given my inclination for Tolkienesque fantasy and pulp sci-fi. But I do enjoy Lovecraft and Ravenloft, so I tried to dive in with an open mind.

As mentioned by so many other reviews of LotFP, the production values are fantastic. Bold line art, a clean layout and several full color plates create a book that's visually appealing to simply look through. For the most part, LotFP clings closely to it's B/X D&D roots when it comes to mechanics. That being said, it's not afraid to toss out what doesn't work. It uses an ascending Armor Class system and Attack Bonus mechanic for combat, which is my preferred method. (Sorry, guys, Thac0 is just counter intuitive.) Hit Points are pretty standard for most B/X era games, increasing by a certain die type as the character gains levels. The classes are, for the most part, what you'd expect: Cleric, Dwarf, Elf, Halfling, Fighter, and Magic-User. The Thief is replaced by the skill-driven Specialist.

It features a small skill set and a simple d6-based skill check system, which is highlighted in the Specialist class. This thief-replacement is not bound up in the tropes of being a "thief," but is instead exactly what it says: A specialist. The character receives more skills (even from 1st level) than all other classes. These aren't just your traditional "thief" skills either. You can use the specialist to build a ranger, a sniper, a pickpocket, or any other adventuring type of character. It's really well implemented.

Another simple, often mentioned, and major change from B/X to LotFP is that only Fighters increase their Attack Bonus beyond first level. This makes them really unique and gives them a tight role within a party. Also, on a more subtle level, it implies that LotFP is not a game focused on combat. By having one class that's exceptional at combat, it helps remind the group that fighting is not always the way to solve a problem. In fact, fighting is probably a bad idea. Just run!

Magic-Users pretty much run in a fashion similar to B/X, except for a few select spells to evoke that Weird Fantasy feel. Magic is something mankind is not meant to mess with, and those spells hint at that - none more so than the first-level spell Summon. The summoning rules for LotFP are a bit complex, but because the spell itself is meant to be a long ritual likely to be cast in combat, it's not a huge deal. It's complex because the Magic-User does not know what they're summoning, or whether they're going to be able to control it. Generally speaking, reaching into the nether to yank something through will not end well.

While LotFP has no concrete setting there is an implication that it's set designed to be set in an era between the late 15th century to the late 16th century. There are rules for Firearms, Maritime Travel and Combat, Land Ownership and Taxation, and other things not traditionally found in "medieval" fantasy. As a side note, given the game's heavily implied historic context, it feels like non-human classes were included simply as a nod to B/X. They don't quite feel like they fit in with the rest of the game and I think if I was going to run an LotFP game I'd reskin Halflings and Dwarves as something else - maybe Rangers and Tomb Robbers - and not allow Elf PCs. Another nice touch by an implied but not explicit setting is that you can make the game as horror-driven, or not, as is suitable to your individual group - though clearly Raggi wants drive home that things living in dungeons are truly horrible and inhuman and those who dare intrude are genuinely insane.

Then we get to the art. The art in this book is definitely not "family friend," but it does a perfect job of illustrating the style of weird fantasy that Raggi is going for. It's just beautiful to behold in its detail. My favorite piece among the art plates (shown below) is the perfect encapsulation of real-world bravery. The girl in the picture is standing protectively in front of (presumably) her family with her armored father already slain, clumsily holding a heavy sword while tears are streaming down her face. She's absolutely terrified, but she's terrified but still she's putting up a fight. That is bravery. It's just magnificent. 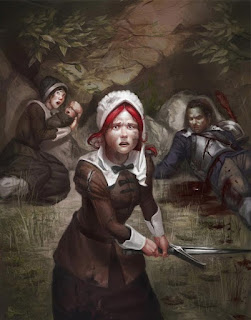 In the end, Lamentations of the Flame Princess is yet another OSR game that I wrote off as something I could just ignore. I did the same with Labyrinth Lord years ago, and avoided Swords & Wizardry for a long time due to my own preconceived notions. You'd think I learned my lesson - because once again, my own arrogance has caused me to ignore a jewel in the OSR that's been staring me in the face for a long, long time.

The final clincher for me was, oddly enough, my wife. She's not an OSR gamer, though she is an RPGer. I showed her LotFP and she was like "I'd play this. This has got a kind of twisted Puritan Fairy Tale vibe to it." My wife is seriously picky about the games she plays, and getting a non-OSR gamer's opinion without all the baggage associated with the controversy and politics surrounding Lamentations gave me an objective opinion from someone I respected.

So yeah, I think I'll be running LotFP some time in the future, much to my own horror and surprise. But then again, isn't that part of what Lamentations is all about?