I've spoken before of Low Fantasy Gaming and its fantastic blend of OSR simplicity and 5th Edtiion mechanics. Seriously. It's good. If you don't have it, grab it. Well, +Steve Grod  (aka Stephen Grodzicki) is at it again with Midlands Low Magic Sandbox Setting. It is currently available as a PDF for $10 on DriveThru and RPGNow. That's usually my breaking point for a digital product, but Steve was kind enough to provide me with a review copy before I even knew it had been released. Even at the price point, I feel like MLMS is practically a steal. 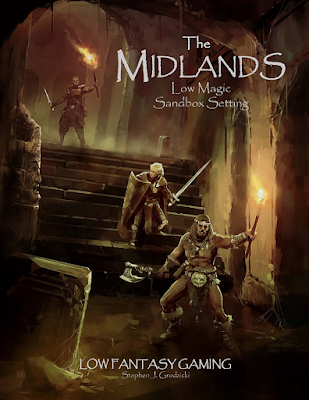 It's a massive product, clocking in at 365 pages and is billed as "a low magic, low prep, customisable sandbox in a 'points of light' medieval fantasy realm" and that's exactly what it is. The region, known as the Midlands, is described in several broad locations. The vast majority of this is wilderness and it is described in the text and repeated in the details of the flora and fauna to be very dangerous. The few settlements are given brief descriptions, a few key locations, along with backgrounds and stat lines for a few major NPCs. In everything, the Midlands are described in terms of adventure hooks. This is a setting that begs to be used. It's not a static painting meant to be looked upon or held some kind of sacred "canon." The player characters will change the world simply by their actions, and that's clearly by design. I feel this is key to campaign setting books, and its nice to see an author who is willing to pass on their creation onto gamers and give them the freedom to run wild without any kind of implication of what is "allowed."

Given that Low Fantasy Gaming has no clerics or divine magic, it was a pleasant surprise to find a fully detailed pantheon tied to the Midlands. I found this refreshing and a true insight by the author that humanity's belief in the divine in the real world is not defined by witnessing miracles at the hands of Clerics or Paladins, but is part of their natural desire to explain why things happen in the universe - to explain the unexplainable. These religions, even without spell-slinging Clerics, still impact culture and society wherever they are found. This kind of real-world mentality really strength to LFG's "low fantasy" element. It gives the setting a real grounding.

Magic is also given a low fantasy treatment. Even more so than the LFG core book, MLMS is a book that hammers home the fact magic is something man was not meant to know. It is dangerous, uncontrollable, and will inevitably lead practitioners to ruin. Magic items are rare to the point that no such thing as a Sword+1 in MLMS - each magic item is unique and was created for a purpose and was likely the product of an long lost era spoken of only in myth and legend. Magic and magic items in MLMS are, well, magical -- as they should be.

While MLMS could easily be seen as system neutral in terms of using the setting, it does have a few goods specific to Low Fantasy Gaming. Three new classes are introduced: Artificer, Monk, and Ranger. The Ranger is the stand-out here, feeling most tied to the material found within this book and they have a true rugged wilderness tracker vibe to them. They feel... dangerous. The Monk is serviceable without being too Wuxia in its stylings, but I admit I'm not generally a huge fan of the class in general so I might be giving this incarnation the short shrift. The Artificer is a cool concept, but feels unevenly written. Some of its abilities are thematic and cool, like the use of black powder weapons and alchemical solutions, while others feel a bit silly like chaintooth weapons (i.e. chainsaw additions). Still, you could pick and choose these individual abilities and it would be easy enough to disallow that which isn't appropriate to a given campaign.

Where the player options really shine are in the Gear Packs and Party Bonds sections. Gear Packs are class-based packages of predetermined equipment for starting characters. Choose a melee weapon, a ranged weapon, a set of armor, and a gear pack and you're off to the races. Party Bonds establish how the party knew each other before a campaign began, and both quick and surprisingly thematic to the material found in MLMS.

There's a short bestiary chapter which is primarily composed of monsters tied to the specifics of the Midlands setting. They're few enough in number to feel unique, but not so many as to feel as though the setting is populated only by these specific monsters. There is also a small section on designing your own monster. Useful stuff for the GM, but nothing unexpected when it comes to supplements like this.

The GM Tools chapter includes variant initiative methods, a really fun random NPC generator and a magnificent series of random encounter tables that really highlights elements of the setting established in previous chapters of the book. I was pleasantly surprised that "random encounter" did not mean "combat encounter" in these charts, as there is no implication of required violence, nor is there any attempt to "balance" these encounters to the level of the player characters. The rest of the chapter is filled with more random charts including tavern generator, name generator, city street name generator, even bar menu generator - but the real shining random table in this chapter is the Regional Event generator. The Regional Event generator details an event that happens every few months or after a year or so that impacts the setting as a whole. Things the PCs are necessarily involved in, but will likely impact their lives: The death of a king, the rise of a supposed prophet, things like that. It gives the Midlands a real living, breathing quality - something that remains present through the entire supplement.

With all this content, we still haven't got to the meat of MLMS: Adventure Frameworks. This chapter includes 50 adventure frameworks , which aren't as thin as random encounters but are designed to be as easy to implement and provide an evening's worth of adventure with absolutely minimal prep. For GMs with no prep time or when your players head off in an unexpected direction, they're an absolute god sent. Each adventure framework is tied to a location type (city, swamp, forest, etc), and provides several hooks and rumors to draw the PCs in. From there, the framework provides a series of linked encounters that will easily cover a full night of adventure. And there's 50 of them. That's enough to run multiple campaigns without ever running the same framework twice. Each framework runs five or more pages and includes around a dozen encounters. Many have matching keyed mapped for those encounters. Given that much of the inspiration for LFG is in the episodic pulps of early sword and sorcery fiction, this fits style of the game quite well and feels like a natural way to run it. Adventure Frameworks cover about 200 pages of this book.

Finally, MLMS's final pages include an index for easy reference of the material contained therein. This useful, but often overlooked touch is always nice.

I'd also be remiss if I didn't discuss the art. MLMS is filled with black and white line art and extensive maps of several locations. Grodzicki makes use of several pieces of stock art by many different artists, but it never feels disparate. This book is packed with visual appeals and there's rarely a page in the entire thing that's absent of art. The maps are both easy to use and visually appealing, which is an important balance, and vary between traditional top-down view and isometric.


Midlands Low Magic Sandbox Setting is a worthy successor to Low Fantasy Gaming. Its over 350 pages of content provide enough material for years of game play, using LFG or any other OSR game out there and for those who are using with LFG the new classes are a nice touch. While I was given a copy by Steve for review and I have trouble with a $10 price point for most PDFs, had I bought this with my own cash, I certainly would have felt like I got a deal. The most ringing praise I can provide is that Midlands Low Magic Sandbox Setting makes me want to run an LFG game physically, at a table, with my local players. Few products do that these days, and so far the LFG product line is batting a thousand. I can't wait for the physical release of this product and will be snapping it up as soon as its available. You can grab it for yourself on RPGNow and DriveThru.