A Fault In Our Stars: Starfinder, ADnD 2E, and Repeating History

So I wanted to talk a bit about Starfinder and how I see it. Not as a game or in comparison to White Star, but as a business move and why I think Paizo chose to release a sci-fi adaptation of their juggernaut fantasy roleplaying game. But to do that, I have to go back to 1989 and the release of AD&D, 2nd edition. 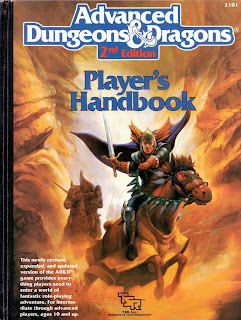 However you feel about AD&D 2nd Ed, it was an absolute runaway hit. It made money hand over fist and sales had exploded far beyond expectations. The books brought slick, previously unseen production values to the game with full color core books that were priced to buy. By 1993, AD&D 2nd edition dominated the market and it was the game when it came to tabletop RPGs. Granted, tabletop RPGs get compared to D&D by default, but this was unprecedented.

It seemed as though there was nothing AD&D 2nd Edition couldn't do. The campaign settings were fresh as gamers explored Ravenloft, Dark Sun, and Birthright. The seemly endless slew of class and race books gave players new ways to customize their characters with optional kits and new equipment, spells, and sub-races. There was no end in sight.

The long and short is that TSR was on the verge of economic collapse because of the runaway success of AD&D 2nd Ed. They had to keep producing supplements to maintain an ever diminishing revenue stream. That's the nature of tabletop roleplaying games. Roleplaying games are a niche of a niche of a niche market. Most folks who play them do so casually, briefly, or out of curiosity. They borrow a book from a more active friend while they're playing, or they buy a single core book for their own reference. Maybe they buy the "core three" books, but never grab a supplement. They might grab a supplement which focuses on their favorite species/class if they're really into the game. But the fact is, most gamers aren't rabid consumers of every single thing published for a game line.

So, TSR had to keep producing supplements on more minuet elements of their flagship game to keep the money coming in. But as the product line bloated, the profit margins thinned. AD&D 2nd edition had more books released for it than you can count (I stopped at 250...) and let's face it, some of them were very narrow in their focus. (Did we really need Thief's Challenge, let alone Thief's Challenge II: Beacon Pointe?) 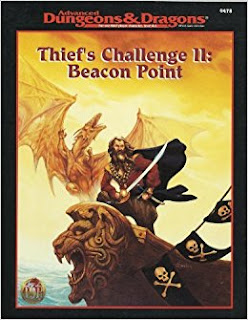 But, to keep these more tightly focused products viable, you have to keep much of the previous library of material in print, maintain storage space to keep unsold product, pay your employees, and keep the lights on. So, eventually, the numbers just didn't add up and TSR was on the verge of collapse. That's when Wizards of the Coast came in and bought the company.

Then came D&D 3E. There was a lot of backlash against it at first. So many people had spent over a decade chasing the dragon (so to speak) keeping up with the endless gamut of 2nd Ed books that they felt betrayed by the fact that D&D 3E was going to render all that time and investment invalid. While many players recognized that a new game being published did not obligate them to play it, I still understand their frustration.

But in the end D&D 3E and its OGL were a success beyond all predictions. So much so, that when it ended and 4E was announced in 2007 and released the following year many gamers decided not to invest in yet another itteration of the world's most famous fantasy roleplaying game. Enter Paizo's Pathfinder. Serving as as rallying point for those who wishes to continue playing D&D 3E, Pathfinder was released under the OGL with a few minor changes to D&D 3.5.

And it exploded. Pathfinder was a runaway hit, like AD&D 2nd Edition before it. It even managed to out-sell Dungeons and Dragons, the very game from which it was born. For a brief time, Pathfinder was the Rebel Prince, dethroning the king of all roleplaying games. 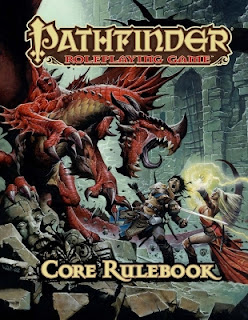 Pathfinder began to release supplements, as is expected. From the Advanced Player's Guide to Mythic Adventures, they left no stone unturned, no supplement unpublished. Soon the runaway success of Pathfinder ran away with them. Ten years later, and countless supplements later, Pathfinder feels its in the same place as TSR was in 1998. But, unlike Wizards of the Coast, my guess is that Paizo doesn't want to alienate the fans that have been loyal to them for the past decade by releasing a Pathfinder, Second Edition. So, how do they add longevity to their product line when the vein of ore that is fantasy seems tapped? 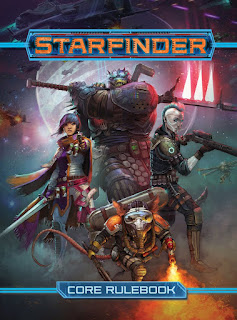 Starfinder feels to me like an attempt to extend the longevity of the Pathfinder product line and IP without releasing a second edition. But, I'm uncertain about it's potential for success. Yes, it sold out at GenCon - but there hasn't been a whole lot of buzz surrounding it that I've noticed. Admittedly, I'm over here in the OSR corner of the RPG community - but still, the tabletop roleplaying game community isn't exactly vast.

Do I hope Starfinder is a success? Absolutely. By all accounts Erik and the folks at Pathfinder are good people. Besides, even at its most successful, RPG publishing profits are razor thin. Given that many fantasy gamers aren't interested in sci-fi (and vice versa), I'm doubtful that Starfinder will be as successful as Paizo needs and that may create a rough road for Paizo in the days to come.
Posted by James M. Spahn at 8:58 AM