+Diogo Nogueira is a work horse in the OSR. Known primarily for preaching the Gospel of Dungeon Crawl Classics and being an amazing artist, what some may not realize is that Diogo has published his own fantasy roleplaying game. It's not another retro-clone, though it shares some commonalities with traditional d20-based games. Diogo's baby is called Sharp Swords & Sinister Spells, and it's available in both PDF and digest-sized softcover on DriveThru and RPGNow. Did I mention that both the PDF and the physical are priced at Pay-What-You-Want at the time of this writing? 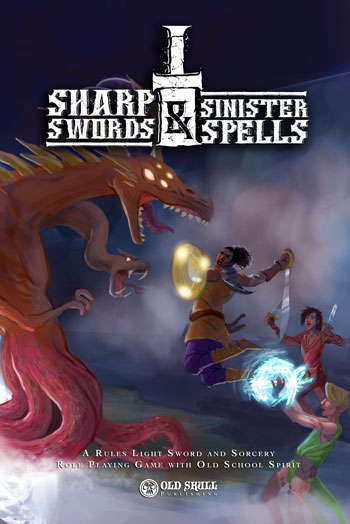 Nogueira's love of Howard, Smith, and other iconic pulp fantasy authors is evident in his product. The entire book amounts to 48 pages, but that page count could probably be cut in half if you removed the art. That's not a criticism at all. It's the art and how it's been carefully selected or crafted to evoke that Hyborian feel that really sells the game.

SS&SS really trims the fat, though the author's inspirations seem evident in reading the product. Diogo's love of DCC is obvious, but I also get a bit of a White Box vibe going on. I feel as though he took Dungeon Crawl Classics, D&D 5e, Swords & Wizardry, Astonishing Swordsmen & Sorcerers of Hyperborea, and Polyhedral Dungeon and ripped them apart of the Tree of Woe, then reassembled them to create something both familiar and different.

With only four attributes, three classes, and no skill system you'd think the game would feel a bit thin - but not so. The author is clearly trying to emulate a specific subgenre of fantasy and he stays laser-focused on that style. The system is pretty simple. Attributes (Physique, Agility, Intellect, and Willpower) are determined by your traditional "roll 3d6" method.

Tasks are accomplished by rolling a d20 against an attribute value. If you score under your attribute, the task has succeeded. The closer you get to the attribute without going over, the better you did. These tests can be modified by Positive or Negative Die, which works in a manner similar to D&D Fifth Edition's Advantage/Disadvantage mechanic. If it's a Positive Die, you take the better. Negative, take the worse. Combat is actually resolved using the same attribute test mechanic, but the monster's hit dice modifies the roll - meaning a monster who's hit dice exceed a character's level are going to be harder to hit while those that are lower are going to be easier. Simple and elegant.

Some fast and dirty pulp spice is added by adding options to push your roll (ala Call of Cthulhu 7th edition) and a Luck option. Equipment and weapon ammo are also handled in a truncated, but intuitive and appropriate way.

Casting a spell? Intellect test. Trying to be stealthy? Agility test. It's all that simple.

Weapon damage is equally simple. Small weapons (whether dagger, short sword, hand ax, whatever) do a 1d6. Medium weapons do a 1d6, Large weapons do 1d8. Warriors automatically increase this die by one type (d4s become d6s, d6s become d8s, d8s become d10s). Any class can use any weapon.

Armor provides a form of damage reduction, but make you easier to hit by capping your Agility, while shields make you harder to hit.

Spells are simple, nasty and potentially dangerous to the caster. Casters choose the power level of the spell their casting, which modifies their roll. That means you can potentially throw a heap-nasty spell, but there's serious risk of things going south if you roll poorly. Men were not meant to know sorcery in SS&SS. Magic items are similarly powerful, but always with a cost.

Monsters all have one statistic: Hit Dice. They might also have specific special abilities, but given the player-centric nature of dice rolling and how hit dice of an opponent impacts combat, that's all you need.

Like I said earlier, where this game really shines is in its art and flavor. SS&SS requires characters to begin play with a Complication, which can be randomly generated if necessary. In addition, charts are included to generate on the fly adventure scenarios. These charts, again combined with the art, really give it that dirty sword-and-sandals pulp feel. What's so impressive that a lot of the art in this book is stock art that's been floating around for a long time - but when you get an artist to actually put a book together as a labor of love (which this clearly is), the unity of disparate parts really shines.

If I had to offer any criticisms, it's that SS&SS has a few areas where efforts to keep things brief make some explanations feel truncated or abrupt. Another sentence or so explaining a few of the rules would have clarified things quite a bit, but after reading over it a second time the designer's intent became pretty clear - so this is a minor issue at best. And for being PYWY in any format,  there are really no complaints. Another minor issue was that though the book included an ample list of monsters (35 or so), they did not appear to be organized in any fashion. Having them listed alphabetically or by HD would make for easier reference.

Long and short is that if you're looking for an ultra-light pulp fantasy game you can stuff in a backpack and run on the fly, Sharp Swords & Sinister Spells is a must. Grab it now. You won't regret it.
Posted by James M. Spahn at 1:05 PM