I can say, without hyperbole, that Swords & Wizardry changed my life. I know that's a dramatic statement, but it's true.

You see, Swords & Wizardry is more than just a game. Somehow between the pages, the charts, the dice, the TPKs, and the critical hits, there really is a kind of magic - a kind of wizardry. I've read, and written, for most retro-clones on the market currently - heck, I even managed to publish one of my own. These are all great games in their own right, but there's something transcendent about Swords & Wizardry.

I can't explain how +Matt Finch and the folks at Frog God Games did it. When books get cracked, dice get rolled, and adventures are shared a bond gets formed. Something more than just "gaming buddies." Something more than even friendship. Swords & Wizardry is the foundation upon which the OSR community is built. My own company, Barrel Rider Games, wouldn't be what it was without Swords & Wizardry. Tenkar's Tavern, the local bar in this small town of grognards, would be just another bar without Swords & Wizardry. This singular game, and our love of both it, and the hobby, serve as the basis for much of our community. And like this community of ours, Swords & Wizardry is limitless.

With that in mind, I'd like to make an announcement... 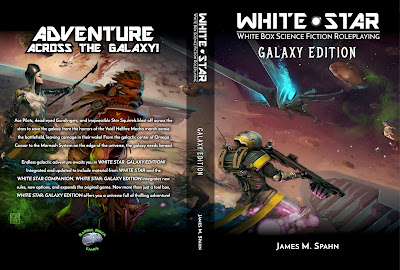 White Star: White Box Science Fiction Roleplaying Galaxy Edition
ADVENTURE ACROSS THE GALAXY
Ace Pilots, dead-eyed Gunslingers, and irrepressible Star Squirrels blast off across the stars to save the galaxy from the horrors of the Void! Hellfire Mecha march across the battlefield, leaving carnage in their wake! From the galactic center of Omega Consor to the Marnash System on the edge of the universe, the galaxy needs heroes!

It will integrate material from the original White Star core rules and the White Star Companion, as well as cleaning up and clarifying some rules, and adding a plethora of new material. This new material will include the following:

White Star: Galaxy Edition is currently in layout. It's looking to be about 275 pages, all said and done. Credits include:


In order to maintain a thriving White Star community, I will also begin publishing the official White Star 'zine in the Summer of 2017 - 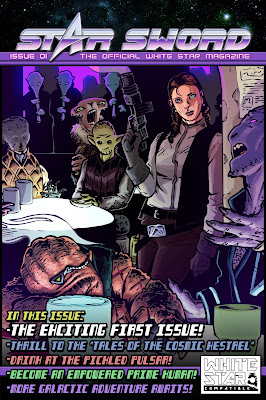 Star Sword will be a quarterly 'zine, available in both print and PDF formats on RPGNow and DriveThruRPG. Submissions will be accepted beginning with the second issue. Contributors will be paid for their work as well as retaining the rights to any material submitted. This is, first and foremost, a magazine for and by the White Star community.

The future of both Swords & Wizardry and White Star are as bright as a sun that's gone nova, so please join me as we blast off to adventures filled with swords, stars, heroes, villains, and most of all - fun!
Posted by James M. Spahn at 9:01 PM