Review: Tails of Equestria: The My Little Pony Storytelling Game

How did this happen? Well, believe it or not, because I lost a bet. Back when I played way too much Lord of the Rings Online, one of my kinmates and I cut a deal. If helped me with a raid and we succeeded, I had to watch two hours of My Little Pony: Friendship is Magic. Being a man of my word, I held my end of the bargain.

I have to admit that from the get go, I was surprised at the depth of world building - but it was still a show about magic pink ponies and there was no way it could be that good. Well, by the time I looked up, I'd watched a dozen episodes and had no desire to stop. I'd been corrupted. I was a Brony.

The thing is, the show really is pretty damned good and I've no shame in speaking on my love of it. It's show populated by cast of female leads who, though archetypal, all are engaging and interesting to watch. The show uses common elements from the Campbellian Monomyth and extensive elements from world mythology - particularly Greek mythology. Anyway, it's a good show. It doesn't talk down to kids as it tries to teach them the value of not being an asshole - or as they say the "Magic of Friendship." After much convincing, even got my wife to watch the show.

And she became obsessed.

Like seriously. She is a publish novelist and immediately dove headlong into the fan fiction community - even making so much of a name for herself as to warrant being a special guest at BronyCon (the biggest MLP convention in the country) for three years in a row (so far).

Why am I telling you all this?

Well, when an intellectual property becomes popular among the demographic of young men who are traditionally regarded as nerdy or geeky, then someone's going to license it for a tabletop RPG.

Enter Tails of Equestria: The My Little Pony Storytelling Game. I purchased a copy for my wife for Mother's Day and gave it to her when it arrived today. I have to say, I wasn't expecting much, and am pleasantly surprised. 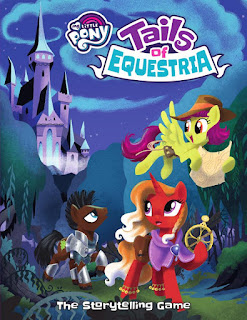 The MSRP is $35 and for that you get a 150-page full color book with gloss pages, evocative layout, and a steady stream of stills from the television show. I've seen gaming books that charge $60 that don't have this level of production quality.

Now, the game is marketed from the get-go at the same audience as My Little Pony - young kids. It assumes that the reader has never gamed. Because of this, it as a simple, but functional system for character creation, task resolution, combat, and various unique elements of the setting material.

The game breaks characters down into three stats: Body, Mind, and Charm. They are rated at a die value ranging from d4 to d20. Contested rolls are made between opponents using the stat and the high roll wins. Characters also have Talents (like Knowledge, or Flying (unique to Pegasi) or Telekinesis solely the purview of Unicorns)) which have their own die value along the same scale. Some tests require the character to have a skill to even attempt it, while others do not. Roll Stat + Talent, take the highest single die, meet or exceed difficulty. That's it. 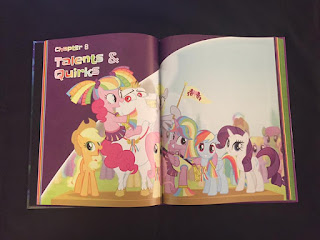 Combat is resolved in the same fashion. The winner of a combat test (which they call a "Scuffle," how adorable), does an amount of damage equal to their successful roll. Damage comes off a flat Stamina, and when your Stamina is reduced to zero, you have to rest and are exhausted. The game does not have character death.

It's a very clean and simple mechanic and excellent for introducing new gamers to the hobby. But where the game really shines is its clean mechanics for evoking the themes of the source material. For every player (including the GM) there is a pool of "Friendship Tokens" that can be used to re-roll dice, increase chances of success before a roll, or provide minor narrative manipulation. These tokens are earned by being a good person - being a friend. If a new player joins the game, they add a Friendship Token to the pool - but that token is not removed if that player cannot return to the table. Their friendship and the spirit of what they contributed remains. Absent, but not forgotten.

The game operates on a level system that runs up to 10th level. Each adventure (not necessarily session) results in every character gaining a level. When you gain a level you can increase a Stat, increase a Talent, or take a new Talent. 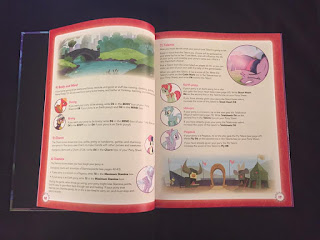 There is also your obligatory introductory adventure - but I have to say, its really well-written and surprisingly in-depth. Like everything else in this book it oozes with innocent charm and themes of the source material shines.

The truly excels as an introductory roleplaying and by tying it to a popular IP for the age range that many kids discover tabletop RPGs, I have to say that this game is a real winner. Not to mention the lessons it teaches are positive and very in line with the show. There's enough crunch and wiggle room to engage more experienced gamers, but the simple mechanics and approachable text make it perfect for young would-be dice rollers. I think it would be especially good for helping a parent whose child is into MLP get into tabletop gaming. The game is even playable diceless by full page drop-table for each die-type (d4, d6, d8, d10, d12, and d20). Simply close your eyes, and put your finger on the page. So it literally has everything in one book necessary to get kids gaming.

Supplementary material has already been produced with obligatory bag of Friendship Tokens. These, of course are sparkling purple plastic gems. Next up is a Box Set which includes several blank character sheets, a GM screen, a full adventure module, and a set of dice - all with an MSRP of $25. 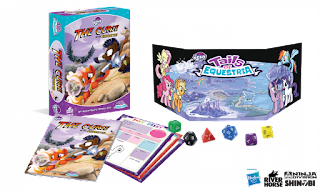 I really think Tails of Equestria is an obvious purchase for any gamer who is a fan of My Little Pony: Friendship is Magic, or for any parent who has a child who is both a fan of the show and has expressed interest in tabletop gaming. Heck, my 2 1/2 year old daughter hasn't let it go since it came in the house - and she's just enjoying the art. Gotta get 'em started gaming early, right? Well, I can't think of a better game to open with.

Email ThisBlogThis!Share to TwitterShare to FacebookShare to Pinterest
Labels: Review, Tails of Equestria