Keep on the Borderlands: Game of Thrones Edition

So I started running the classic B2: Keep on the Borderlands using Labyrinth Lord last night. We had two players absent, so were down to three. A nature-worshiping cleric named Bjeorn and his war dog Fenris, a crude dwarf named Stonefuch, and a wily Magic-User named Castian.

They came up to the Keep, made their entry and began poking around the outer keep for news and adventure hooks. It wasn't long before they tried to get an audience w/ Baron Castilleian, Lord of the Keep. They were given a cold shoulder by the guard, who said he'd pass on their request for an audience. The rest of the afternoon was spent exploring the outer keep. 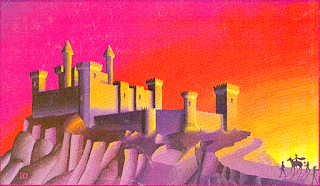 At the chapel they encountered the Curate, Brother Cort of the Cudgel. He is a robust, but zealous cleric of St. Cuthbert. Bjeorn was particularly interested in Cort and the faith of St. Cuthbert. Cort expressed to them his concerns about the nearby Caves of Chaos and that the Baron wouldn't risk his own men to deal with the growing threat.

At the Tavern and Traveller's Inn they hired the services of Hammish, a mute man-at-arms who was (by coincidence of random rolls) also a worshiper of Cuthbert, but no cleric. Hammish was a survivor of the dreaded Barrowmaze, a legendary tomb far, far away. He had been a non-beleiver and when a Cuthbertian saved his life and told him to never again blaspheme against the Cudgel, Hamish cut out his own tongue to show his conversion.

The PCs spent the rest of the evening negotiating with a pair of musicians, hoping to hire them as retainers - but that didn't really go anywhere, beyond good roleplaying. They retired for the evening at the Traveller's Inn - sleeping in the common room. Castian noticed one of the inn's residents was an elf and through good RP and reaction rolls, they traded spells - though the Elf got the better of the deal.

While Castian was doing that, Bjeorn wandered back to the chapel and after much discussion with Cort and asking about the Church of St. Cuthbert he actually converted to the faith - unbeknownst to the rest of the party.

Stonefuch and Castian continued to explore the keep, meeting with the Priest who lives in the large house inside the outer keep, whom I named on the fly Friar Duck. Duck claimed to be a worshipper of the God of Knowledge, and Castian immediately began to angle him to see if he had any magic-user scrolls. Duck did not, being a cleric, but did give Castian a book that would help him learn to speak and read/write Elvish.

As Bjeorn took oaths to St. Cuthbert, Stone and Cas learned the history of the Keep from Duck - the Baron was a weak man with Lizard Men threatening the keep to the south and the Caves of Chaos in the north. Duck believed he needed to be overthrown, and that Duck himself had even loaned the Baron 10,000 gold pieces to bolster the garrion several months ago - but other than hiring more troops the Baron had taken no action. Clearly, he needed to be replaced with a new Baron - a strong ruler, a wise ruler...

Cas and Stone were actually taken in by this and the three of them decided to go to the inner bailey and do just that. They were going to literally go commit a coup. Their plans were stymied when they saw Bjeorn exiting the chapel wearing the vestments of St. Cuthbert. They couldn't tell the newly Lawful Cleric they were going to overthrow the rightful ruler. So they told him they were going to go speak with the Baron and asked him to come along.

Duck, using his leverage from lending the Baron money, managed to talk their way into an audience. As the four of them, and two guards, sat in the Baron's chambers the PCs discovered a shocking revelation.

Baron Castellian was a 15 year old boy who had inherited the Keep after his father was assassinated 18 months ago. He was good intentioned, but indecisive and still mourning the loss of his father. He had no advisors and was burdened with indesision. But the Baron showed some steel in his spine. He told Duck, Cas, and Stone to leave before they could speak much, tired of Duck's machinations. Because the Baron trusted Cort, he allowed Bjeorn to stay and explained his situation to the Cudgelite. Bjeorn was clearly sympathetic and came out, and explained the truth of the situation to the party.

Cas and Stone immediately grew suspicious of Duck, who told them that he simply wanted a strong leader because if the Keep were attacked EVERYONE would die. It has a hard deed, but someone with strength needed to be in charge.

The PCs asked about the Lizard Men, who they knew nothing of. They learned the there is a loose agreement between Keep residents and the tribe. If the humans cross the river into the swamp the lizard men kill them, while if lizard men come north of the river they are slain by the humans. A harsh arrangement set forth by the Baron's father - but it has maintained a fragile peace.

The PCs get the idea that if they can somehow ally with the Lizard Men and get them to aid in defeating the Caves of Chaos, then two threats might be eliminated in one blow - but the Lizard Men are distrustful of humans and do not care for their affairs.

So as the session ends, the PCs are setting out to do some recon on the Caves and evaluate the threat, while Duck remains behind in the Keep to get a sense of how the locals feel about the whole affair.

The PCs are suspicious of Duck, of course - but have no idea he is a spy for the cultists in the Cave. Now as they head out to the Caves of Chaos (with Hamish in tow), Duck has sent messenger birds to the cultists in the Caves, and is considering traveling in secret to agitate the Lizard Men and break that easy peace - forcing the Baron to act (and hopefully fail), to make him look weak and position himself to take control of the Keep while the PCs are absent...

Not a single combat was had, but the entire session was tense and engaging for everyone at the table. The players love the intrigue and are invested in the moral complexity and the lives of the many NPCs they met. A fantastic opening session.