Tales from the Lost Realm: The Promised Land of Aldemar

The Promised Land of Aldemar


The Withering Blight did more than destroy the Northern Kingdom - it divided the people who had lived there for generations. When the land began to fallow and blacken, the people turned to the Knights of the Blazing Dawn to protect them. It had always been so. For a thousand years the Knighthood had defended the Northern Kingdom from dragons, goblin hordes, and giant invasions. 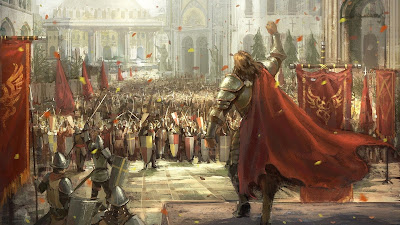 That all changed when the Withering Blight took hold. No magical sword, no noble warrior, could undo the disease that was destroying crops, changing the land, and filling the skies with an unnatural darkness. The High Lord of the Blazing Dawn, leader of the knighthood and regarded as the most pious of all the holy warriors, prayed for seven days and seven nights as unnatural things roamed the land and devoured the living. On the dawn of the eighth day, he rose and stood upon the battlements of Highsun Castle. He decreed that the Silver Prince - God to which all in the Northern Kingdom paid homage - had abandoned them. The High Lord would lead a pilgrimage to a new land; the prophesied and promsied land of Aldemar. There the Silver Prince would bestow new blessings on the faithful who were willing to undertake such a difficult journey. 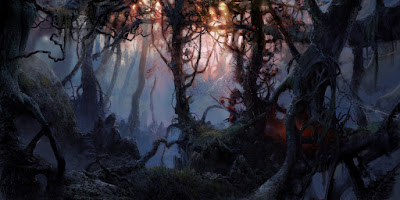 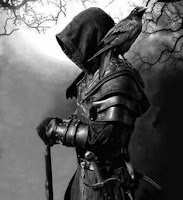 Known as the Decree of the Fading Dawn, this proclamation split the knighthood in two. Many knights thought the High Lord was abandoning the peasants he had sworn to protect to the undead hordes of the Withering Blight - leaving them to die, or worse. They tore off their silver tabards and disavowed the High Lord. As the High Lord of the Blazing Dawn rode away, those former knights who remained behind donned tattered black tunics - naming themselves the Swords of the Solstice, those who remained behind when the darkness was deepest, faithful that they would defend the Northern Kingdom until the New Dawn arrived and the kingdom was restored to its former glory.

For a year and a day the High Lord lead the faithful across the width and length of the Realm. Finally, in a land far from the Northern Kingdom, he discovered a furtile valley filled with rolling fields and lush forests. He declared the faithful had reached the promised land of Aldemar and thrust his sword into the ground. Thrusting his sword into the ground, he decreed that as long as the people remained faithful that Aldemar would flourish.

Flourish it did. In less than a decade, the Swordkeep of Aldemar was completed, greatest castle in the entire Realm. A bustling city grew around it, bustling with trade from the wandering elves and hardy dwarves. The High Lord rechristened the Knights of the New Dawn and they became known as the Silver Crusaders. Churchs to the Silver Prince and his Holy Crusaders sprang up across the land. Piety and plenty went hand in hand. In less than a century Aldemar became the greatest kingdom of men in the Realm.

In the modern day the Kingdom of Aldemar is a symbol of all that is good and pure - a physical incarnation of faith and endurance. Silver Crusaders patrolled the land, driving away bandits, goblins, and other meager threats to the land. Great tournaments filled spring days and summer nights, with valiant knights proving their prowess against one another - proud in their pageantry. 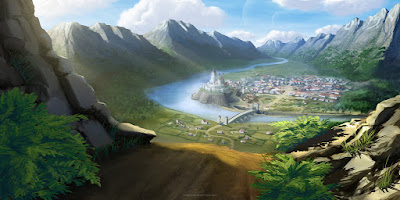 The High Sword, now little more than a relic at the center of the Swordkeep, became little more than a relic of a legendary era. Peace lead to complacency. Complacency lead to quiet corruption. Nobles became more concerned with feasting and congratulating themselves for their ancestors accomplishments than taking care of their subjects. Crusaders gave up true honor in the face of an increasingly complex and convoluted code of proper behavior. Neglect turned to apathy - and all of it hidden behind a thin veil of chivalry.

Goblins, long hidden in the deepest parts of the Shaden Forest, have gathered together to form great tribes. Under harsh task masters - giants and ogres - they are unifying in worship of a new and dark diety that remains hidden far beneath the earth. Dracalas it is called.

But Dracalas is no new and vile god. Slumbering far beneath the earth for thousands of years, dragons have been disturbed by the deep delving and thundering hooves. Aldemar has awakened something dark and terrible. It will awaken soon, and no blunted tournament lance or fragile pride can save the haughty people of the Promised Land of Aldemar. 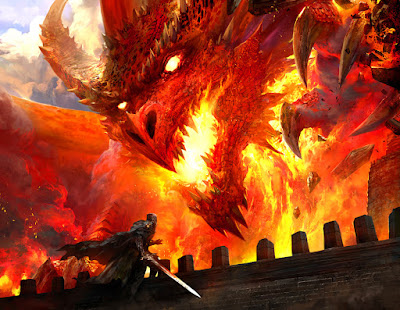