I love character options. Heck, it might even be an obsession given that I wrote over fifty alternate classes for Labyrinth Lord and published a hardcover collection of them for the same game. I did extra classes for both Swords & Wizardry Complete and Swords & Wizardry White Box. So yeah, it's a bit of a wheelhouse of mine, and probably always will be. There's something about designing a class that is just really fun for me.

But, I'm getting old and simplicity is becoming more and more appealing as the years accumulate. Lately I've been reading +Basic Fantasy Role-Playing Game. Every time I read it, I like it more and more. It only features your "core" four classes: Cleric, Fighter, Magic-User, and Thief. Unlike other games which draw heavily on B/X-era D&D, BFRPG uses race and class, not race as class. 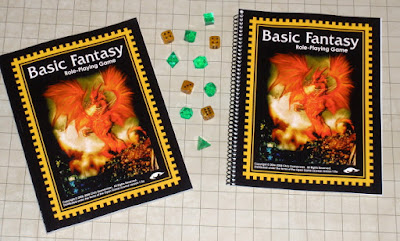 So, continuing to use BFRPG as an example, we have the following character options if we use just the core rule book:

That's 16 possible class and race combinations, using only the core rules. That's quite a lot, if you ask me. I can hear what you're saying now, "But what if I want to play a ranger, a paladin, or an illusionist?"

This brings me to my other issue. I'm a huge fan of Secondary Skills over Non-Weapon Proficiencies. You wanted to play a ranger? Sure, simply choose "Forester" or "Hunter" as your secondary skill. You're now a fighter who is also a forester. Want to track a creature through the woods? Ask your GM what you should roll. They may require an attribute check or give you an "X-in-1d6" chance, or a percentage chance. This could change based on level, circumstances, or both.

This encapsulates the "rulings, not rules" ethos of the OSR. The GM decides how it's handled - often on the fly. Instead of spending five minutes flipping through a book for a chart, a quick ruling is made and the game moves forward. To continue with the "Forester" example, a Thief who has this secondary skill might be a Robin Hood type bandit, while a magic-user might be a mysterious witch. A cleric who is a forestser? Druid much?

This can also make for some interesting combinations. Take an uncommon profession that's not even on a chart, but still evocative; Rat-catcher, for example. A fighter who is also a rat-catcher might be skilled at the training of dogs like terriers and others bred to hunt vermin as well as be quiet knowledgeable about the layout of local sewers. A magic-user with this profession must have a cat familiar who assists them in their profession and practice magic tied to plague and summoning small monsters - or even hunting magical vermin.

"But I still can't play a paladin," you say. Sure you can - and you don't even have to be Lawful Good. Heck, in BFRPG there are no alignments. Simply be a Fighter who was raised in the church and genuinely believes in their doctrine. You're not a paladin because you can Lay on Hands. You're a paladin because you believe in the holy word and crusade against its enemies. A magic-user raised in the church might act as a magical inquisitor - he knows and understands the arcane arts so often practiced by the enemy so that he can fight fire with fire. A thief might specialize in the acquisition and recovery of holy artifacts - or be an off-the-books assassin for high ranking clergy.

The point is that by combining a bit of character history with your class you get an endless list of possibilities. Your character concept doesn't end just because you chose a class. In fact, it's just the beginning...