In a few days, White Star: White Box Science Fiction will be eight months old. When I first announced the game during last year's Swords & Wizardry Appreciation Day, I didn't do it with a lot of pomp and circumstance because frankly I didn't think it was that big a deal. What began as a twenty-eight page supplement for Swords & Wizardry WhiteBox grew in the writing until it became a 132 page game built upon the foundations of WhiteBox. I didn't really expect that when I sat down and started writing.

All I knew was that I was excited for the then unknown film Star Wars: The Force Awakens, I really wanted a "Spelljammer OSR" game, and that the Flash Gordon soundtrack by Queen was amazing. So, I started writing. Between Freddy Mercury's cries of "Flash! Aaaahhhh!" and the glam metal guitars from the soundtrack of 1986's Transformers: The Movie I just had fun. I thought, "What would be cool and how do I keep it simple?"

In the end, the White Star came in at just over 30,000 words in a first draft that had been written in four weeks. More than I had expected, but still a small game. I talked to a few friends, and showed them some early concepts. I remember conversations with +Adam Muszkiewicz, +Pete Spahn, +Wayne Humfleet, and +Erik Tenkar. I showed them the early cover I'd mocked up and talked basic concepts. I was keeping it low key, like my other White Box releases. To my surprise, all of them were really enthusiastic about this generic pulp sci-fi OSR game with a bad cover.

Then I showed it to +Jason Paul McCartan. And he said to me "Dude, this game is so much better than that." He spent countless nights helping turn White Star from that simplistic, crude thing you see above into the beautiful book that has exceeded my wildest dreams. He was meticulous, precise and has an amazing eye for detail. Pushing me, Jason refused to let my book be anything other than the best it could possibly be on my limited budget. He became more than a creative partner over these weeks - he became a close friend. But Jason's a nefarious man. His work was so good, raised the bar so high, now I had to hire him for every future product in the White Star game line. By the time I discovered his vile plan, it was already too late.

White Star exploded like super nova. I woke up the morning after it's late night release to find it at #1 on RPGNow, where it sat for about 3 months straight. I couldn't believe when it went Silver in a day and Gold in less than a month. Seriously, this all is weird for me. It all piled on fast.

White Star changed Barrel Rider Games. Suddenly, I got noticed. It's intimidating, to be honest. I just tried to go back to what I preferred doing: writing. I started work on the White Star Companion and a few other larger projects - some BRG and some freelance. I've tried to release a few smaller products between the White Star core book and forthcoming Companion - little $1 products to let folks know I hadn't forgotten or fallen out of love with the little game. I promise, there's a lot more to come for White Star - both from Barrel Rider Games, and from third party publishers I suspect.

So yesterday I released one of those $1 products: the Combat Medic class. I was shocked to see today that the little book shot up to #1 on Hottest Small Press lists on RPGNow and #2 Hottest Title. Now what left me flabbergasted was the fact that the White Star core rulebook followed in its wake, clocking in at #2 Hottest Small Press and #3 Hottest title. Add to this the fact that White Star has remained in the top 10 Hottest Titles since its release and the whole thing is personally mind boggling. 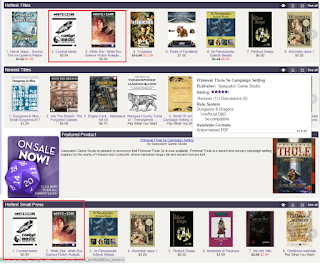 I never thought my little sci-fi love letter to OD&D and pulp sci-fi would be so successful. What are the odds, ya know? I'm not not sure why the game has succeeded the way it has, but I've just come to appreciate the affection shown for White Star and how the OSR community has, by and large, embraced the game. Every time a third party product gets released, I get downright giddy. It's just so damned cool that people want to play with the toys I made.

I guess this long, rambling blog post is just to say that it's been a long, strange, wonderful journey so far and I suspect it's just getting started.