So, I've been following Dungeons & Dragons 5th Edition pretty closely. I've grabbed every book in the line so far and been pleased with all of them. Thus far, we've got the standard issue "Starter Box," and trinity of PHB/DMG/MM that we've all come to know and love. But instead of inundating us with splat-book after splat-book of added rules and power creep, Hasbro has taken a different direction with things.

Instead of that we got massive modules peppered with setting information each told as a storyline event. Tyranny of Dragons, Elemental Evil, and Rage of Demons. Hasbro was smart about each of these storyline events. Instead of it simply being a "super module," they turned it into a multi-platform event. Elemental Evil (based loosely on the classic T-Series of modules) included an MMO expansion and a board game - neither of which required any experience with the table top RPG. Rage of Demons included a super adventure and a new video game. Basically, Hasbro decided D&D is more than just a table top RPG - it's an entire brand. They've started to treat it that way, which is good for everyone. 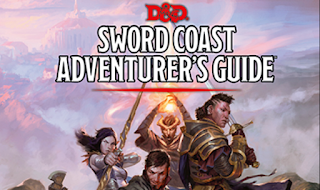 This ensure's the longevity of the table top RPG by allowing them to generate previously untapped revenue by marketing to a broader audience in new ways. It also slows down the supplement train so I'm not chasing the next splat book and draining my wallet every month. The core books for D&D have been out for fifteen months and we've seen five supplement books (Hoard of the Dragon Queen, Rise of Tiamat, Princes of the Apocalypse, Out of the Abyss, and most recently Sword Coast Adventurer's Guide). That's an average of one book every three months. Good for you, Hasbro! Way to learn a lot from the train wreck that was D&D 4e!

Now, that being said, I was a bit worried Hasbro had gone in the complete opposite direction from the previous editions and completely disavowed supplemental mechanics in their material. Extra feats, backgrounds, magic items, etc, were all going to be
left to the DM. After all, 4 large scale adventures in a row is quite a bit and really says a lot, if you ask me.

Then in walks Sword Coast Adventurer's Guide. Now, let me begin by saying I'm not a huge Realms fan. I don't hate it, but it doesn't thrill me either. It's a bit too high fantasy, too bloated with powerhouse NPCs, and just... well... over done. So, when this supplement was announced I was not terribly thrilled. But then I saw the page count: 160 pages.

I was expecting some bloated gazetteer and what I got was something that reminded me of the classic World of Greyhawk supplement. Broadly painted, loosely defined, and with a great map. The first hundred pages give an overview of the Sword Coast and the surrounding regions. I like that they stuck to this area in particular, as almost every FR game I ever played in ended up or spent the majority of its sessions in the region. So, it only made sense for them to do this instead of some massive "Tour of the Realms." These descriptions are painted in broad strokes with story hooks peppered through out. The book is clearly directed at the player, from the title on down - but any DM worth their salt will find a plethora of useful info in these pages.

The final thirty pages are dedicated to new character options. New class paths, new backgrounds, new subrace options - exactly the kind of stuff you'd expect. But it's clear this isn't the book's focus. The setting and in particular the setting as a malleable thing to be used as the DM sees fit to suit their campaign. The book seems more concerned with making the Realms your own, as a player and DM, than adhering to a bloated canon that's meandered through four previous editions.

For 160 pages, the book is a bit pricey at an MSRP of $39.95, but bargain hunters and online shoppers shouldn't have a problem finding a more reasonable price. Even at forty bucks, the content in here is pretty solid stuff. Sword Coast Adventurer's Guide made me want to play in a Forgotten Realms game, and that's something that hasn't happened in a long time.
shoppers shouldn't have a problem. I'd really recommend this book - even if you're not planning on running a Forgotten Realms campaign it's got an appendix in the back for adapting the new rules info to Dragonlance and Greyhawk. It's cursory, to be sure - but still a nice touch. All in all, if this is the direction that Hasbro plans on taking their non-adventure supplements, I'm totally on board.

Addendum: There is a generally negative reaction to this supplement and I feel it's a bit unfair. It was billed as a kind of "Player's Guide to the Sword Coast" and that's exactly what it is. It provides a lot of meaty information to players adventuring in Faerun and the Sword Coast. But that doesn't obligate it to be full of fiddly bits and optional rules. About 20% of the book is exactly that, fiddly bits and options - while the rest is culture, history, background and source material. I find this to be perfectly in line with the product line of D&D 5e - they're not flooding the market with rules and options  and instead providing a bit here and there and leaving the rest in the hands of individual players - and I'm proud of them for having faith in the buyers to do it.