Necrotic Gnome Productions has quietly produced quality products for almost a year now. The Complete Vivimancer is, in my opinion, their strongest product to date and showcases author +Gavin Norman's ability to take the simple rules of Labyrinth Lord and really run in an entirely new direction with them. He doesn't gussy it up with flashy art or layout - just good ol' fashioned OSR content. 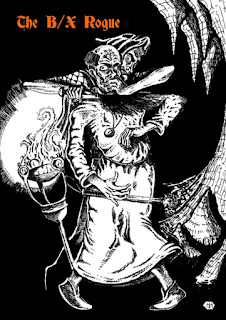 I heard some of the buzz around The B/X Rogue and decided to plunk down the very reasonable cost of $1.50. After giving it a read I can say that this product really brings a lot of options to the traditional "Thief" class, while keeping things simple and easily integrated into any B/X clone out there. It seems to be written with Labyrinth Lord specifically in mind. But, there's no reason it can't work for other OSR games on the market.

The B/X Rogue does something unique with the traditional thief class. The product is correct in calling itself "The B/X Rogue" and not "The B/X Thief." Instead of providing several abilities that are locked in and increase at a specific rate, a character selects a number of special abilities called "Talents" at character creation to reflect their unique skill set. This can include the traditional picking locks and hiding in shadows or things like being able to make a skilled retreat from combat or even cast minor magic spells. As a character increases in level they can learn new Talents. It's a simple system that works very well and is easy to understand.

This creates a kind of a la carte character, but always with a roguish flavor. Want a more bardic character, or an assassin, or a swashbuckler? The B/X Rogue does it all. At a buck fifty, its well worth the cost of admission and has me chomping at the bit in hopes that Norman gives Fighters, Clerics, Magic-Users, Dwarves, Elves and Halflings similar treatments. I'd really recommend this to anyone out there who plays a lot of Basic/Expert, Rules Cyclopedia, or Labyrinth Lord.
Posted by James M. Spahn at 12:06 PM