So a few years ago Wizards of the Coast started their Premium Reprint series. To my recollection, they reprinted the core books for the 1st and 2nd editions of AD&D. These products were well received by the community at large and I'd imagine there were more than a few OSR fans (myself among them), who were glad to see classic games on modern shelves. 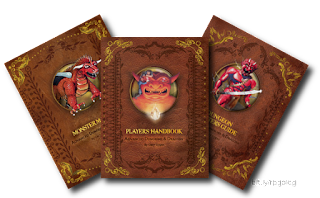 My brother introduced me to gaming and did so through AD&D 1st ed, so I in my nostalgia-motivated furvor, I pre-ordered the core books when they were announced from my now defunct FLGS. I played them, enjoyed them and had a helluva a good time. I really enjoy 1st edition. Admitedly, that's certainly a game I see with rose-colored glasses. But nevertheless, when I get together over Skype or G+ with my brother and our old group from the halcyon days of gaming we slip right back into things as if almost 30 years never passed. I wanted more of that and more AD&D 1st edition reprints.

Much to my surprise, I got it! Wizards of the Coast announced a few months after the release of the premium releases that they'd be publishing three more books for 1st ed AD&D: the love-it-or-hate-it Unearthed Arcana, and two hardcovers that would feature the T-series of modules (Tomb of Horrors, White Plume Mountain, Expedition to Barrier Peaks and The Lost Caverns of Tsojcanth) and the A-series (Scourge of the Slave Lords). Freakin' awesome, right?!

Now, I'm not ungrateful at all and I'm so thrilled these books are out there. I know it's a pipe-dream, but I really would have liked to have seen the trend continue. Oh, to hold The Temple of Elemental Evil or the GDQ series (Queen of Spiders), or (dare I dream?!) my beloved Castle Ravenloft in my hands again as shiny, new books with their class rules wrapped in memory and dream. Man, that would have been cool.

I'm not bitching at all, but just reminicing about my adventuring days of old. Man I had some good times - and I still do today. I know that all these products are available for purchase as PDFs through the D&D Classics webstore, but there's something different, something magical about holding those books in your hands. Still, I never thought I'd see AD&D 1st Edition ever in print again and that happened - so who knows?
Posted by James M. Spahn at 7:53 AM