So while cleaning the kitchen tonight I started listening to Path of Legends, the D&D 5th Edition podcast hosted by +Vincent Florio, +Sal Valente, and +Erik Tenkar. I started listening primarily because I Vince and Erik are my friends and I have a total man-crush on Sal. My opinion of 5e has been "It's not bad, but it's not my go-to game." Hearing them talk about it has really got me excited, even eager to play or even run Fifth Edition.

The three hosts are clearly comfortable with one another and have good chemistry and interesting conversations. The podcast is specifically taken from the point of view of OSR gamers and how they utilize 5e from that style of play. They spend quite a bit trying to define the OSR. To that I paraphrase an old Taoist adage: "The OSR which can be defined is not the OSR."

They then go into an awesome discussion about Gnolls, which got me itching to run an entire campaign based around these evil bastards and their demonic master. They talk about some conversion tools on the web for converting monsters to 5e and spend the rest of the time bantering back and forth like the grizzled old grognards they are - which is enjoyable.

The real strength of Path of Legends and why I decided to throw some money at their Patreon is because more than anything it made me want to play Fifth Edition - and that's the true hallmark for me of a good gaming podcast. I say this because for several weeks I've been hemming and hauling about getting rid of my 5e books, simply because they aren't getting used, More over, I didn't want to use them. Now not only am I eager to use them, but I even pre-ordered the newest 5e product: Curse of Strahd. That's something I'd love to see the Three Amigos dicuss, given that Curse of Strahd has its roots in the classic OSR module I6: Castle Ravenloft. 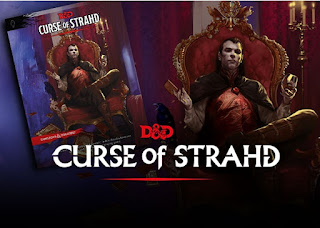 In any case, I very much want to run 5e in the future and can't wait for the next episode. So give Path of Legends a listen and if you like what you hear, throw a buck a month at them on their Patreon. Why not more money, you say? Because that's the maximum level of listed support. Not only are these guys friends of mine, but they've put together the beginnings of a damn fine show.
Posted by James M. Spahn at 10:49 PM