Dark Albion: History and Politics come to the OSR

Dark Albion: The Rose War, written by the RPG Pundit and published by Dom Publishing, is the kind of product that makes me jealous. I'm an amateur history buff and a huge fan of George R.R. Martin's A Song of Ice and Fire series - both the films and the books. You see, a few months ago, I considered doing a politics supplement for Swords & Wizardry: WhiteBox because of my love of both these things. I made a few notes, wrote down a few ideas, and set it off to the side. I turned my attention to White Star, which has had its own success.

Well, as things became finalized for the print-on-demand version of White Star, I returned to my idea - only to find that someone had done it far better than I ever would. That product is Dark Albion: The Rose War. You see, Dark Albion is more than just what it says on the tin. It bills itself as "Grim Fantasy England in the 15th Century." But that's not quite right. This product is that and more. You can read it and use it as written with your OSR game of choice. Statistically speaking the game is very light. It can be slotted into Labyrinth Lord, Swords & Wizardry, Lamentations of the Flame Princess or any other OSR or older version of D&D or AD&D on the market with no mechanical modification. That's not to say the game is lacking in substance. In fact, quite the opposite. 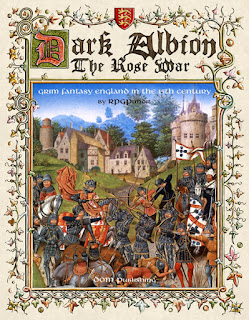 Dark Albion takes readers and gamers into a 15th century England and does so with remarkable detail - but it never feels overwhelming or dry. It does not give simple, stark facts of the past. It paints this distorted mirror of a history that feels familiar, but the details make it fresh - like fine spice to a classic meal.

In spite of the fantasy elements introduced, the game is firmly rooted in history and this is reflected in the art - much of which is taken from historic pieces in our own world suitable to the period. The game has its goblins and elves and magic - but these are foreign and rare. Most have never seen a magical beast or a spell being cast - and most never will. These things are dark and dangerous, best left undisturbed and unspoken.

But Dark Albion is more than a rich historical setting. It takes OSR gaming out of the dungeon and into the throne room. Social class and political acumen have more power than swords and spells. While this in and of itself is not earth-shattering, the way it is implemented makes the rules regarding social rank and political power something to be easily integrated into any OSR game. In this sense, a referee who wants to reach into the pages of Dark Albion and extract these options is not bound to an alternate 15th century England. There's no reason these rules couldn't be used when player characters establish strongholds and gain titles or applied to an original campaign where the referee wants to include politics and power plays as a part of their campaign from day one. 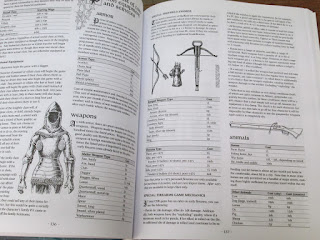 That being said, I can't imagine not wanting to use Dark Albion with its written setting. It's beautiful, detailed and so vibrant. It begs to be played. The characters can change the world, even from first level. In fact, the setting is written so that few characters rise beyond 3rd level. Those that do have done deeds worthy of renown and are going to have quite the reputation. With a reputation will undoubtedly come attention and with that characters will be drawn into the political conflicts of the day. Whether they're mercenaries, nobles or knights - all bleed by the thorns of the Rose War. 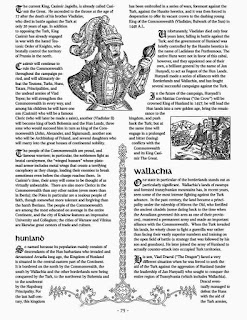 Dark Albion is one of the best products I've purchased this year, if not the past five. I could take this book and run a campaign for years - whether Labyrinth Lord, Lamentations of the Flame Princess, or even a game not commonly associated with the OSR like Basic Roleplaying by Chaosium or Steve Jackson's GURPS. The sheer versatility of the product combine with great production values, engaging writing, and solid cartography make it an absolute must-have. In short, Dark Albion: The Rose War is a must-have and given the density of what you'll find in its pages I'd especially recommend a printed copy.