The Gift of Swords & Wizardry

Swords & Wizardry has become my favorite OSR game on the market. Its three flavors (WhiteBox, Core and Complete) offer differing levels of complexity to meet the needs and wants of the individual gaming group - but at their core, they are simple, 1970s and 1980s era fantasy roleplaying. But I'm reluctant to call Swords & Wizardry a retro-clone because it does make changes to some of the core aspects of the games which inspired it. It offers a single saving throw, an ascending armor class option and the Hit Die Equivalent to easily determine a monster's skill in combat instead of basing it singularly on its actual hit die. These are the changes that stand out in my mind and I'm sure there are others, I just can't recall them at the moment.

I'm not +Matt Finch and I didn't write Swords & Wizardry, but I like to think that these changes and options were offered to help streamline play and facilitate that feel of fast, free-spirited gaming that so many veteran gamers felt when they were in high school, college, or whenever they first entered the hobby. Swords & Wizardry is a game made as an act of affection for those days and the game itself. I really think the Quick Primer for Old School Gaming offers a lot of insight into Finch's mentality when designing Swords & Wizardry, and its well worth a read.

But Finch did more than create the game. He did something greater. He gave it to us. Finch had the courage to walk away: "If you love something, set it free." And that's exactly what he did. In a few short years, Swords & Wizardry flourished. Supplements were released by independent authors and producers in a myriad of formats. We saw supplements in both PDF and print-on-demand service, and even on the shelves of our local game shops.

A community sprang up around Swords & Wizardry. While other old school roleplaying games have more supplement support, I've never seen a more active community than the Google+ Swords & Wizardry Discussion group. Ideas are traded, banter is tossed back and forth, friendships are made. And in the end, that's what gaming is about. Strangers and fellow gamers become friends. This happens because gaming is a shared experience, and so is Swords & Wizardry.

Swords & Wizardry is a gift.

We are free to use it as we wish. We can add or remove rules, play with our wildest ideas and make this game exactly what we want it to be. Somehow, it remains Swords & Wizardry, and with that it still recalls those halcyon days of gaming. Yes, I admit my stance on this game is colored my nostalgia - but these are games about pretending to be wizards, elves, and knights - so I'm OK with that.

To that end, my own one-man publishing house Barrel Rider Games, will be offering its newest release for Sword & Wizardry WhiteBox, White Box Demihumans, as a Pay What You Want PDF until midnight tonight - April 17th. It features seven new races for use with Swords & Wizardry White Box: Black Widow Elves, Dagonites, Deepstone Dwarves, Goblins, Greenleaf Elves, River Halflings, Sidhe and Sprites. After the Pay What You Want ends, it will become available for sale at a price of $1.99 for the PDF download. 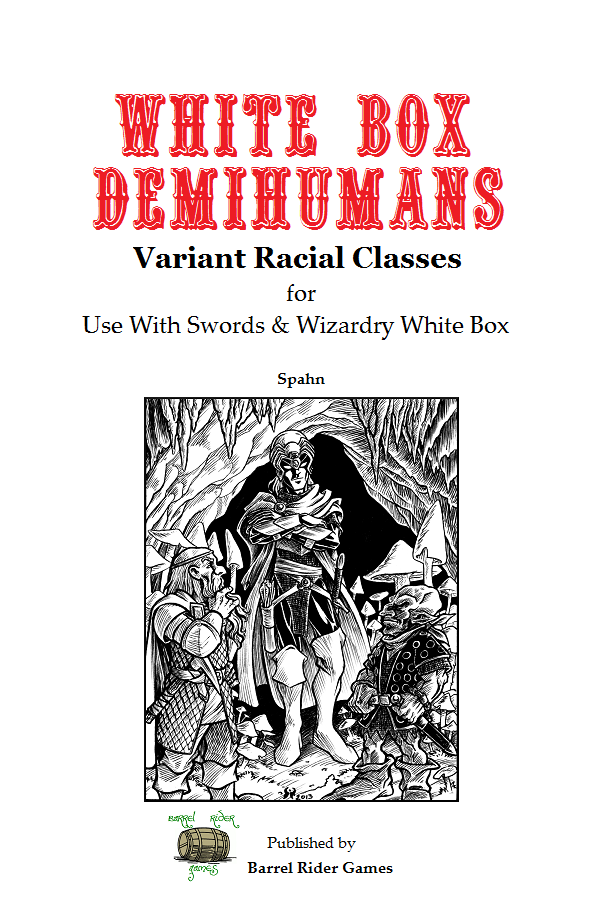 In addition, I'm pleased to announce the next major Swords & Wizardry WhiteBox product to be released by Barrel Rider Games: White Star: White Box Science Fiction Roleplaying. This complete roleplaying game will be available as both PDF and print-on-demand. It is a stand-alone product which uses the Swords & Wizardry WhiteBox rules to tell fast and loose sci-fi stories in the style of Flash Gordon, Buck Rogers, Star Wars and the original Battlestar Galactica. It will feature seven original classes, new equipment, new weapons, rules for ship-to-ship space combat, and lots of other goodies. And if you like some fantasy to go with your sci-fi, it's fully compatible with Swords & Wizardry WhiteBox.﻿ 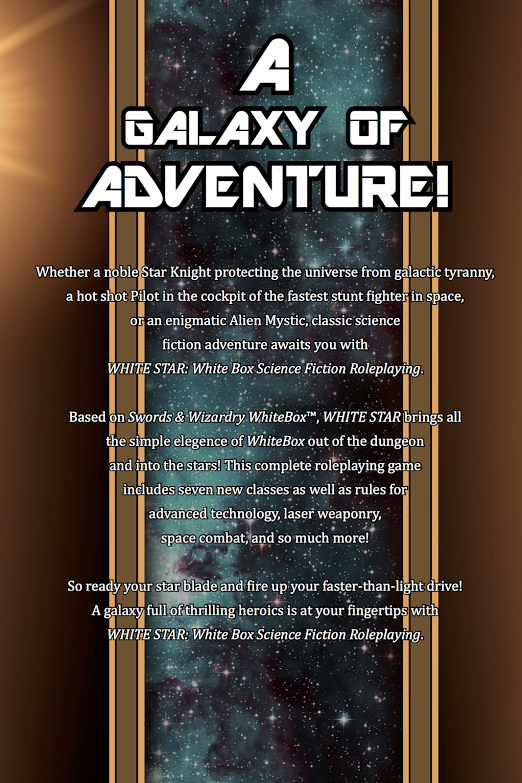 That's the beauty of Swords & Wizardry. Matt Finch created the game, but we can make it into anything. So, have a great Swords & Wizardry Appreciation Day - and make something all your own.
Posted by James M. Spahn at 6:03 AM