Tilting at Windmills: The Quixotic Knight for S&W WhiteBox

Don Quixote is my favorite piece of classic literature and almost my favorite book of all time; only The Hobbit and The Lord of the Rings beat it out. The Quixotic Jedi is my favorite template in The Star Wars Roleplaying Game. Needless to say, I love romantic tales of knight errantry. So, I decided to do a Quixotic Knight for Swords & Wizardry White Box.


Quixotic Knight
Whether educated noble or simple peasant, the songs and tales of knights in shining armor committing deeds of unparalleled heroics have are inspiring. Nobles dream of living up to the very word that defines their social class while commoners hope to rise above their station to become paragons of virtue. These stories are passed from parent to child for generations. History becomes legend and legend inspires the bold.
The Quixotic Knight is the embodiment of the chivalric ideals that only truly exist in myth and fantasy. Unlike true knights, the Quixotic Knight has been so deeply moved by the stories and songs of old that they genuinely believe themselves to be the modern embodiment of these long lost heroes. Years of reading and singing has driven them to embrace fantasy as reality. They ride into battle astride pack mules whom they claim are great destriers. They give their bent spears great names and polish them as if wielding lances of shining steel. Common milk maids are courtly princesses and windmills are giants. There is naught but glory and beauty in the world of the Quixotic Knight. Only death will end their noble errantry, and in their eyes it shall be one worthy of song for ages to come.
The Quixotic Knight may advance to 7th level.

Weapon/Armor Restrictions: Quixotic Knights can wield any weapon. They may wear leather or chain armor and use shields. Many Quixotic Knights will try to wear plate armor in an attempt to appear more chivalric, but they are untrained in the proper methods to wear this heavier form of protection and even when wearing plate armor, they only receive an armor bonus as if they were wearing chain.
Inspiring Fool: The sheer tenacity with which a Quixotic Knight is willing to face overwhelming odds is often inspiring to others. While a Quixotic Knight is either charging from atop a steed or fighting in melee, he inspires his allies and grants them a +1 bonus to all saving throws.
Errant's Luck: Many Quixotic Knights have an uncanny luck. Once per day, they may re-roll any failed saving throw or “to-hit" roll.
Squire (4th): At 4th level the Quixotic Knight attracts the service of a “squire.” The squire is typically a simple peasant or farmer and use the statistics of a Human (Bandit) as shown in Swords & Wizardry WhiteBox. They arrive to serve the knight armed with a spear, leather armor and riding a mule. They serve loyally, and if slain a new squire will arrive in one year.
Saving Throws: Quixotic Knights are dedicated to their illusionary knighthood. They receive a +2 bonus to resist any mind-effecting spell that would cause them to act in an ignoble fashion.
XP bonus for Charisma: This class bonus is due to a high Charisma. 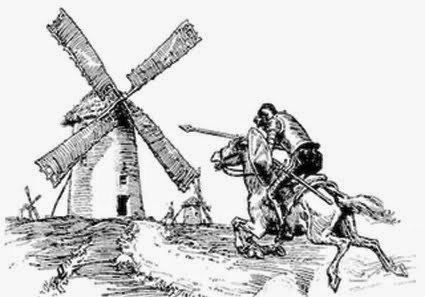