One of the great things about the OSR movement is the fact that sometimes someone releases a supplement so unique, so out of the blue and so... well... bizzare that you can't help but be curious. That was my reaction when I first heard about Darkfast Classic Fantasy - Advanced Classes: Ducks, a supplement for Labyrinth Lord written and illustrated by David Okum and published by Okumarts Games. 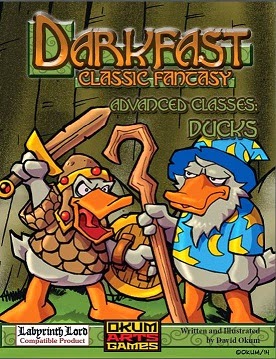 Ducks doesn't pull any punches. It puts is all out there. Yes, this 9-page supplement is written for the express purpose of introducing and playing humanoid duck creatures in Labyrinth Lord. Imagine Donald, Huey, Dewey, or Louie (of Disney fame) in a fantasy RPG and you get the right idea regarding physical apperance. I have to admit that when I first heard about this product before its release over on a Labyrith Lord community my reaction was "Wait, what?" I just didn't get it. Why Ducks? Why in Labyrinth Lord? I was confused.

Okum provides a believable, yet broadly painted background, for this new character option that can easily be inserted without too much difficulty into an existing campaign. Granted, gamers might be a bit thrown to see a three-and-a-half foot humanoid duck wielding a broadsword or casting spells - but let me ask you a question: Have you ever played Castle Amber? Or Dungeonland? All kinds of gonzo stuff in there, and Ducks seems to be following in that tradition.

Okum breaks from the Labyrinth Lord tradition of Race-as-Class, and instead provides a kind of hybrid. Ducks have their own saving throws, their own weapon limits and their own armor limits. Like all other demihumans, they are restricted in level and are only able to each 10th level. But, each duck selects a kind of profession based around the four human classes.This means that, yes, you could have a party of ducks. All ducks. I have to admit, a bunch of duck PCs on a pirate ship might be kinda cool.

In addition to rules and a basic background, Okum presents a description of general personality traits common to ducks, how their villages function, and even a brief description of their religious beliefs. He closes out the supplement by providing some random charts to generate a name (with some clever nods and cute puns), a character motivation and a personality trait or two. There's even several duck-themed adventure seeds.

Is Darkfast Classic Fantasy - Advanced Classes: Ducks worth the picking up? I think that depends on your campaign. While I personally tend to go for a more serious tone than even the most sincerely-played duck PC could probably achieve, I think they certainly could have a place in whimsical Labyrinth Lord games. The production value is absolutely professional and Okum's writing is very direct. You get everything in a very linear and straightforward presentation - with a touch of humor. Okum's race expects themselves to be taken seriously, but the reader is clearly meant to be in on the good-natured fun. So, I'd say yes, if you enjoy a touch of whimsy in your fantasy campaigns, go for it. Ducks is available on DriveThru RPG and RPGNow in PDF for $2.50.
Posted by James M. Spahn at 6:18 PM