Review: The Village of Larm

I did a brief review after purchasing this supplement a few years ago on RPGNow, but wanted to take this time to go over it with more depth here on Traveling Spellbook. So, without further delay, I give you The Village of Larm, a supplement for Labyrinth Lord published by Brave Halfling Publishing and written by Moritz Mehlem. 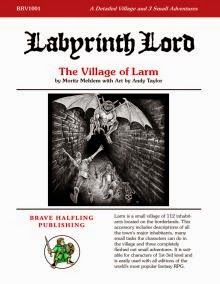 Larm is a short supplement, clocking in at only 27 pages. But there's a lot packed into those pages. While it's smaller than some modules, the amount of content the buyer gets is well worth the price of admission. The simple title is accurate, as Larm is a simple product. It's written around a village of the same name with a few adventure seeds scattered through out. On the surface Larm doesn't seem like anything new or special, and to be perfectly honest it's not. It's a typical basic era fantasy village with several small town problems suitable for low-level adventurers. But that's not a weakness - that's this product's greatest strength.

The village is well stocked with a diverse but believable collection of NPCs and detailed locations. The village itself is actually introduced in the Labyrinth Lord core rules on the "Known World" map in the back of the book - but that's all it is: a name on a map. Mehlem takes that name and fleshs it out. He's created the perfect jumping off point for any basic era fantasy role-playing game. The tone, the feel and the style just ooze old school gaming. I've used Larm as a springboard for many Labyrinth Lord games, and it has always been a resounding success whether it was with veteran gamers or those new to OSR gaming. My players fell in love with the simple charm of the village and became invested in the NPCs. Within a session or two they cared about Larm, and that's a testament to the quality of the product.

As far as adventure seeds, Larm has four major ones. There is a ruined temple located within city walls that the local cleric would like the characters to restore and it makes a great "My First Dungeon." It's got a scattering of undead, a few minor magic items and some of the encounters will require brains and brawn if 1st level characters hope to survive.

Next we've got a nod to the trope of the "rats in the cellar." The local miller has got a bug problem and is willing to pay a few coins to get the infestation dealt with. This isn't really an adventure unto itself, but its a great way to introduce new gamers to the mechanics of combat while still being a challenge.

Lastly, there's a tribe of goblins nearby who are causing trouble. This one is designed to showcase wilderness encounters and using the terrian to a tactical advantage. Even characters as high as 3rd level who go charging into the camp are likely to get slaughtered. The players will have to be clever if they hope to take care of business.

In addition, there is a an adventure that requires a healthy dose of role-playing from the characters. A holy tree of importance to a nature worshipping cleric is dying and he is willing to pay anyone who can investigate and find the cause. This is the kind of seed that can be woven in with the others and gives the players the opportunity to explore the village and engage with the NPCs without drawing their swords.

All of these hooks are presented through the classic "sign post in the middle of town," which gives the players the freedom to explore them at their leisure and the potential to bite off more than they can chew if they're not too careful - but again, that's kind of a tradition in old school gaming.

The village of Larm and its denizens are given 10 pages of text, but its a well stocked ten pages. You have a fully detailed village with over 30 locations and all the prominant NPCs such as the mayor, the local tavern keeper, the local priest and the captain of the guard - along with several others. After that we're given appendicies detailing the various encounter locations for the adventure seeds.

The maps are simple, and have a very old school feel. They're clean, concise, but evocative and they do their job well.

Now a referee can take Larm as it is, or they can expand on it. When I used it to great success in my game I added details to keep my players engaged. A local NPC was secretly trying to start a thief's guild, one of the players was being constantly rebuffing the advances of the mayor's daughter, and the crazy old man who lives on the hill was whispering about a prophecy that eventually became a vehicle for the entire campaign.

And I think that's the true strength of Larm: It's a springboard. It leads to greater things. The fact that the author sets it in the "Known World" of Labyrinth Lord and uses land marks of that location implies its context as part of a larger whole. Its set on the Dolm River and the city of Dolmvay is referenced a few times. Larm is simple enough to stand on its own in any campaign world, but we're offered a hint at a greater world beyond its palisades - if the heroes are brave enough!

In short... Buy this product. Once you have your hands on a Labyrinth Lord core rules set, this will immediately get you started with a new set of characters. It's available for $4.95 on RPGNow, and while I believe the print copy once existed I believe it is now out of print, though you can find it on occassion on Noble Knight Games or ebay. I can't recommend this product enough. I've used it again and again, sometimes with the same players in different campaigns and its always a success.