Sean McCoy, author of Mothership, posted an article on his substack titled Dungeon23 and it's taken the indie RPG scene by storm. So, I'm throwing my hat in the ring. I'll likely peter out and not complete it, but this is for the fun of it, right? Basically, the idea is that you get a journal and make one level of a megadungeon each month, doing the write-up for one room each day. By the end of the year you've got a 12-level, 356 toom megadungeon pretty much done.

So for my Dungeon23 I'm going to design Master Treasure Seeker - not gonna stat it for anything, I think. Just keep it narrative and descriptive. So, what's my hook? I guess if the adventure had opening box text it'd go something like this.

Bandoras Fortunefoot was once the most renowned halfling adventurer across the land. In ages past stories were told of his uncanny exploits and daring adventures. A master treasure seeker, he traveled east of east, over the great mountains and beyond the endless forests, returning with countless stories and wealth beyond measure. For years he went to the wild places of the world, returning with a smile, a story, and a new treasure. Finally, one day, he retired to a luxurious burrow home that is the style among his people. But no one quite knows where his estate, Fortune Hole, is located. At least not until now. A long-abandoned halfling community was recently discovered far from the foot trails and roads of the world, left behind for unknown reasons.

Well, you my dear adventurers, have been fortunate enough to somehow acquire the Key of Fortune that is able to open the door to Fortune Hall. It is said that buried in hidden alcoves and deep pantries are all the wealth that Master Fortunefoot accumulated on his countless adventures - but until now his home has been lost and his treasure abandoned. With this key you will be the first in generations to across the threshold of Fortune Hall, lay eyes upon Bandoras's most excellent tea room, see exactly what he kept in his larders (that time did not claim over the centuries) and maybe, just maybe, find that endless wealth that lay in secret tunnels beneath this luxury estate... 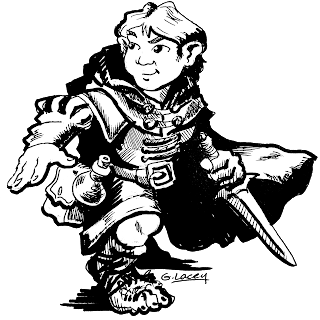 Level One: Burrow and Grounds: This is the ground floor of Fortune Hall. Bedrooms, kitchens, parlors, the greenhouse, garden, patio, and living area will be found here.

Level Two: Grand Pantry: This is the primary food storage area, including cold storage. Cheeses, meats, and barreled beer will be found here, along with a few surprises.

Level Three: Wine Cellar and Mushroom Garden: Deep beneath Fortune Hall is Bandoras's beloved wine collection and private mushroom garden where he grows excellent delicacies known to half lings across the land.

Level Four: Museum of Treasures: Accessible only by those who know the secret passages and have the grand Key of Fortune, Bandoras keeps several treasures and oddities he has recovered in his many adventures on display in this private collection.

Level Five: Natural Tunnels: These organic caverns appear to have been intentionally connected to the level above for some unknown reason. They are winding, tight, dangerous, and still inhabited by wild creatures.

Level Six: Grand Falls: This very deep chamber is a massive hole descending downward with narrow, wet stairways and tiny nooks and alcoves, all splashed by great underground waterfalls that descend into a great pool at the bottom.

Level Seven: Mushroom/Mycanoid Cave: At the bottom of the level above is a great pool of sparkling water and a very humid chamber where magnificent mushrooms grow and strange mushroom-like creatures that secretly dwell there.

Level Eight: Mad Arcanist's Lair: Deep within the earth, a hermetic wizard has carved out an underground space for all manner of strange experiments, often capturing both Mycanoids, Goblins, and Kobolds to use as test subjects.

Level Nine: Trap Factory: Great and dangerous contraptions are built, tested, and go haywire on this level, where Goblins and their cult masters prepare to go to war with the Arcanist above and then storm the tunnels above in a quest for gold.

Level Eleven: Cult of the Dragon Worshipers: An elite cotiere of goblins infused by ancient draconic magic lives and worships here, casting down treasure and other offerings to the level below. Zealot and infused with magical energy, they will do whatever is necessary to protect their masters below.

Level Twelve: Clutch's Lair: This is the lair of a clutch of six dragons who were the children of the ancient dragon that Fortunefoot robbed for the majority of his treasure. They are working slowly and surely to rise up and reclaim their ancestral wealth.