Last year in my review of Dark Albion: The Rose War I called the historic OSR campaign setting and supplement one of the best products in the past five years and I hold to that. With that in mind, I was both excited and a bit skeptical for the first major follow-up: Cults of Chaos. When a product line's launch title sets such a high bar, its easy to see future products fall into a glut of diminishing returns. Still, I remained optimistic and was quite eager for the product's release.

Much to my surprise, the RPGPundit and Dominique Grouzet were kind enough to provide me with a complimentary review copy of Cults. I spent the weekend reading through this 90 page softcover supplement and have to say that Cults of Chaos is a worthy follow-up to Dark Albion: The Rose War. 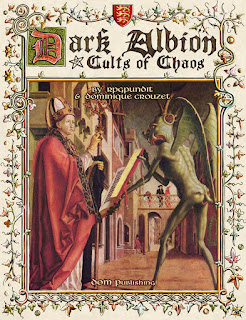 Cults of Chaos continues the same easy to read two-column layout found in Dark Albion and like its predecssor, it continues to make excellent use of medieval and public domain artwork that, unlike other publishers who are forced to use material for budgetary reasons, is quite evocative and strengthens the themes of the written material. Unlike Dark Albion, Cults of Chaos also makes use of some more modern black and white line art. While the art remains thematically appropriate to book's written word, it is sometimes jarring when it appears on opposite a late medieval woodcut. That being said, it's never so much to draw you out of the book - just a noticable change from the Dark Albion: The Rose War.

With only 90 pages to work with, Cults of Chaos doesn't waste a single word in getting straight to the point. From the second page it launches into exactly what the book is designed to do and how to impliment the source material in both a Dark Albion campaign and other OSR fantasy RPGs. Cults of Chaos is exactly what it says on the tin: It is a supplement that allows referees and game masters to develop, design, and apply evil cults as antagonists in a campaign. In addition, it addresses in a brief, but not stunted, fashion how to run a campaign where hunting down these vile organizations.

But its not a matter of "find the dudes in the black hoods sacrificing virgins." Through a well developed collection of charts, Cults of Chaos takes a hokey, worn-out gaming trope and breathes life, depth, and genuine groteseque fear into it. Cults worshipping Wolf Gods, Lycantropes, Demons, Chaos Entities, Frog Men, and the terrifying Albion Elves are all detailed here. In broad overview, the authors manage to take otherwise over-used concepts and infuse them with freshness and validity. They feel like they really do exist in the world of Dark Albion - and that realization is a terrifying one.

But each of these cults isn't concretely defined. Instead they're given a broad overview and an extensive collection of random charts allow the referee to either leave the details to chance or customize them to suit their individual campaigns. Halfway through the supplement, methods are provided to run investigative campaigns where players are tasked with hunting down and destroying these vile organizations. But it's not a matter of simply putting a sword in the one in front of the altar. Deception, manipulation, and the terrible cost of interacting with the forces of Chaos - even if you're trying to keep a lingering Order in a world dark and full of terrors. As terrifying and inhuman as some of the information in Cults of Chaos is, the creators never stray into adolescent shock tactics or gratuitous blood and gore for its own sake. By keeping it frank, they maintain the integrity of the product.

In the closing pages of Cults of Chaos the mystserious elves of Dark Albion are finally explained, and I won't spoil the surprise here - but I genuinely enjoyed reading it and the revelations added a whole new layer of fear to an already dark setting. Finally, we get a cult design work sheet and a standard character sheet.

The only flaws I could find in the book (beyond the sometimes jarring use of art mentioned above) were some of the abstract rulings standard to a product that attempts to be universal, but anyone familiar with OSR gaming can easily tweak things to suit their system of choice. It should be available in both softcover print on demand and digital release on Lulu and OneBookShelf very soon, and I highly recommend it. Even if you're not playing Dark Albion, the universal nature of the product means it can easily be applied to any OSR fantasy game looking to add an element of grounded, detailed and genuinely terrifying villainy to their campaign.