I'm a fan of action flicks. That being said, I'm also a bit picky. I want my action flicks to have style. I think most Arnold Schwarzenegger films to be a bit... bland. Instead, give me Big Trouble in Little China, Crouching Tiger, Hidden Dragon, and Kill Bill. Heck, my daughter is named in part for the protagonist of the latter film. Though, admittedly, I have a childhood soft spot for The Karate Kid. So, in the early 2000s when I saw a game called Feng Shui on the shelves of one +Kirt Dankmyer, I immediately gravitated towards the book. An RPG based off Hong Kong Action Cinema? Granted, at that point I'd never seen an HK action flick, I was still drawn into the book instantly. I asked Kirt to run a game of it, which he kindly did. I still remember the angry hockey playing Street Kid and how no one else in the party would let him get his hands on a gun. He was... a bit aggressive. 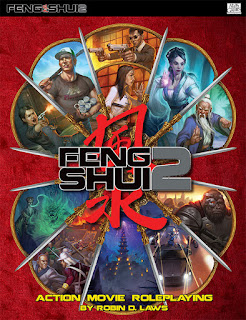 Fast forward over a decade and Robin D. Laws and Atlas Games announces Feng Shui 2. I hadn't the funds at the time to back the Kickstarter to fund the game. Well, recently I got to sit down and give the PDF a good read to see what's changed between the original game and its newest incarnation. In short, not much.

Feng Shui 2 picks up right where the original and clings closely to the original. The 2d6-based system remains. The mechanics are simple. One of the dice acts as a positive modifier, the other as a negative, giving you a stretch between +5 and -5. This modifier is added to a character's base skill. If the total is equal to or over the target number, the action is a success. Base difficulty for most tasks is between 7 and 9.

Here's where Feng Shui 2's rules start to show. Player characters begin at an incredibly competent level of ability. All characters have one of three skills to determine what their style of fighting is: Martial Arts, Guns, and Sorcery. These titles are a bit misleading and have broad applications. Martial Arts covers all forms of melee combat, from karate, to bar brawling, to swordplay. Firearms covers ranged, from pistols, to bows, to thrown weapons. Sorcery is all forms of magic. At character creation, the character's method of mayhem starts at around 13. This means the character is among the most capable at this skill in the world. They can do larger than life, impossible things.

And that's the way it should be. 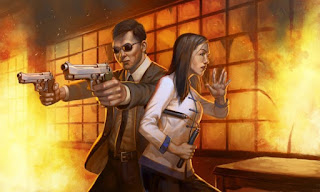 From there, Feng Shui 2 continues to revel in its own glorious absurdity. Characters drop nameless mooks in a single punch, they somehow survive shotgun blasts at point blank with minor wounds that are healed in the next scene, and they can run up a hail of bullets being fired at them to execute a flying spin kick at their opponent's face with absolute perfection. The game is built to be as fast as a flurry of blows from Bruce Lee himself, and twice as dangerous.

As if that weren't enough, all PCs have a pool of Fortune Points, which can add +1d6 to any roll. If the character's positive modifier die or Fortune die comes up a 6, they may re-roll and add that to their total. If their negative modifier comes up a 1, they re-roll that as well and apply it as a penalty. This inevitably leads to some amazing scenes on both ends of the spectrum.

How do you make such a monstrosity of glorious two-fisted action? It's simple. The game includes 45 templates that cover almost any conceivable action movie trope. Are you a Maverick Cop on the raggedy edge? What about a dark and stealthy Ninja? Perhaps you're an Everyday Hero caught up in grander events. Hell, you might even be a Transformed Dragon, bound in human form. After picking your template, you decide on a Melodramatic Hook. These are as cheesy and over-the-top as everything else in this game. Maybe you have amnesia and are trying to reconstruct the details of your old life. Perhaps you've got a slow acting poison in your veins and need to find the cure. Of course there's always the classic - you've sworn vengeance for the death of your spouse/child/parent/sibling/dog/whatever and nothing will stop you. Now, come up with a cool name and a cool catch phrase. You're good to go in five minutes.

Characters are presumed to be living in Hong Kong and acting as agents in the Chi War. The Chi War is an epic battle across time for control of the past, present, and future of Earth, Humanity and the awesome magical power of Chi. The game is implicitly designed to be begin in the modern era and move between ancient China, Victorian Era China, and a post apocalyptic future where cybernetic apes rule the show after 97% of humanity has been wiped out. (See? I told you it gets pretty absurd - but what's not to love about cyber-monkeys with a grudge?)

When a campaign begins, the GM typically describes a scene (presumably in Hong Kong), where all the characters are present. What happens? A fight breaks out of course. Maybe Triad assassins attack a local resturaunt where they're all eating, ninjas attack a during a crowded parade, or a group of street thugs start a riot - whatever works. The players then tell the GM why their characters get involved - typically in a way that ties to their Melodramatic Hook. "These ninjas seem familiar! A piece of memory comes back in a flash and I remember seeing ninjas on a rainy, moonlit night." "My partner was a good man, and a good cop. I know the Triads had him killed and paid off the department to turn a blind eye." "My son fell in with these street thugs, and I'm going to find their leader and get him back!"

This instantly unites the PCs and kicks the game off with a bang. Players have Schticks, which are special abilities tied to their template and preferred style of combat or template. So, for example, the Everyday Hero gets bonuses with improvised weapons and can actually recover Fortune Points if they fail enough. Theme is king in Feng Shui 2.

Because the game's default setting is Hong Kong, the came assumes players will be making characters native to that city. I found this refreshing for an implicitly modern era setting, where most default settings are the U.S. or English-speaking European countries. Hong Kong's cosmopolitan nature makes it the perfect gateway to an exotic realm while still holding to elements and accents western gamers will find familiar.

So the real question is this: Does Feng Shui 2 live up to the hype? Is there as much high octane awesomeness as promised on the cover?

Yes... mostly. Because it clings so hard to the conventions of its predicessor, Feng Shui 2 feels a bit like a game that came out of the 1990s, with a blend of light crunchy and strong story elements that sometimes come off as a bit clunky when first implemented. The game's narrative control elements and character agency aren't as evolved as FATE or Dungeon World. That's not a bad thing, necessarily - but it does stand out when compared to other games that encourage collaborative narration. This might prevent players who are new to the game or haven't been in the hobby for too long from being able to leap in with both fists flying right off the bat.

That being said, Feng Shui 2 is a fantastic game. For $50 (or $20 for the PDF via RPGNow or DriveThru RPG), you get a 350 pages of full color glory with thematic art sprinkled liberally through out. For players who want high action that's got a touch of crunch, but still flows well, this game is a fantastic choice. It might even be useful as a transitionary game if you're looking to eventually introduce more traditional gamers to newer RPGs with strong story and narrative control elements. So, grab your Exorcist Monk or Full Metal Nutball, and get ready - you've been drafted into the Chi War! It's time to kick butt, blow things up, and save the world! 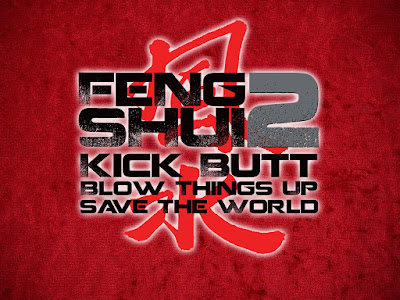